Editor’s Note: This is a re-post of the Airport Marketing Exchange column from Oct/ Nov Issue of Airport World magazine. Airport Marketing Exchange is a new regular column by SimpliFlying to elucidate key issues and address how airports can plan their marketing and communications strategy to affect and measure results. In alternate issues, a special report will feature a Q&A exchange – between David McMullen, VP, Airports (SimpliFlying) and a senior executive from the airport – to continue to question, inspire and reinvent global airport brands.

In the first of a regular series of exchanges, David McMullen catches up with Przemysław Przybylski of Warsaw Chopin Airport (WAW) to exchange ideas and explain why maximising the social media potential of your airport begins with having a clear plan.

Most airports now recognise that social media opens a two-way conversation with passengers. But how many airports can claim a competitive advantage over their neighbouring airports in this sphere? Or, for that matter, how many are driving ancillary revenues from customers who are broadcasting their location in the terminal? Which airports are committed to developing engaging strategies that accomplish overall business goals?

The Airport Marketing Exchange column seeks to discover the answers to these questions, along with many more insights through a series of discussions with senior airport executives who are leading the way in this new age of marketing. 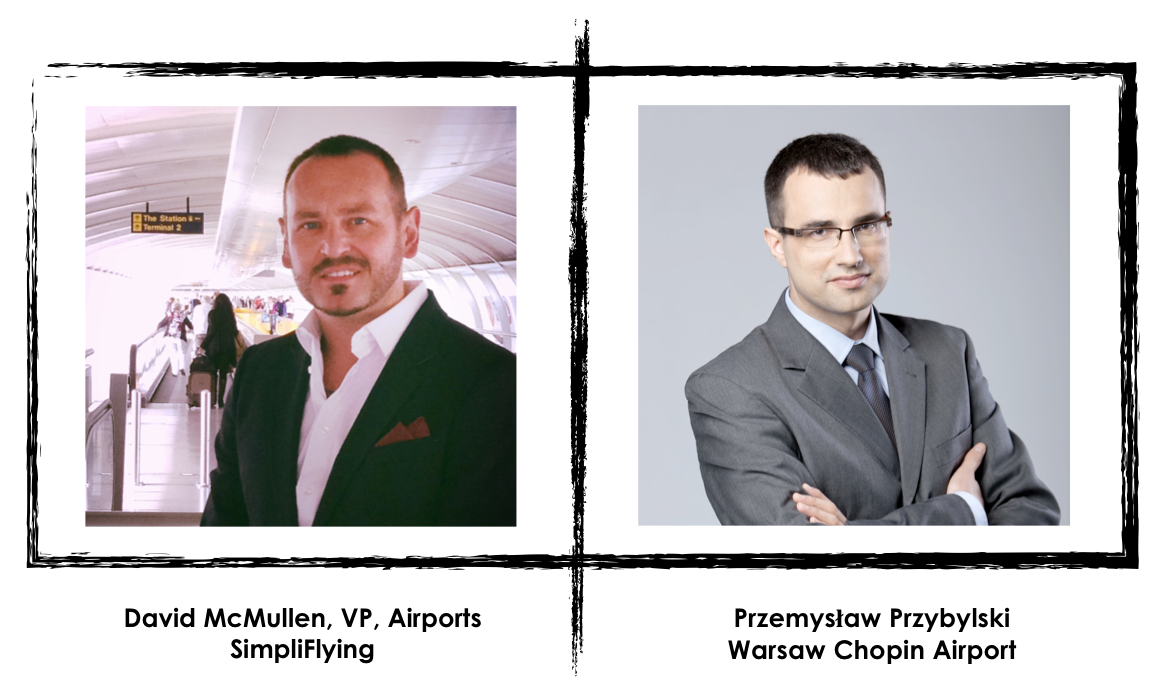 Knowing your business goals and your market

All campaigns – digital, experiential, offline – need to be mapped back to business goals. For WAW, what is your number one marketing goal?

Our chief goal is to increase WAW revenues, with a focus on non-aviation services and the development of marketing activities targeted at services dedicated to the business segment.

While WAW is the main gateway to Warsaw, how does the airport continue differentiating its marketing from upcoming low cost competitor, Warsaw-Modlin Airport?

Compared to Modlin Airport, WAW is focused on the business segment and frequent flyers. For example, it has services like VIP Line and Executive Lounges. However, the recent expansion of LCCs in the terminal shows that WAW is also open and attractive to them.

Yes, and congratulations on the new, permanent return of Wizz Air.

The marriage between route development and marketing

Do you think airports really need to fight for customers? In most cases, there is only one airport in the city and catchment areas rarely overlap which means this isn’t a competitive market.

Without a doubt! Competition for new air service intensifies each year as more and more airports recognise the significance of their network – not only to the airport, but to the region as well.

Airports are increasingly competing to attract passengers from nearby airports and continue competing for airlines. This often means competing against other European destinations rather than airports within the same catchment.

Hence, in order to become the preferred airport for passengers, airport marketing needs to evolve alongside route development strategy. Yet, in most cases, there tends to be a clear separation between commercial marketing and aviation marketing. Speaking of which, how is marketing structured in WAW?

At WAW, airport aviation and non-aviation services – such as marketing – overlap, even though they are separated in the airport operator company structure. This overlap is most visible at the annual Warsaw Chopin Airport gala, which awards best airlines as well as best partners from the non-aviation segment.

In this age of the ‘Connected Traveller’ who is constantly clued into the internet via smart devices, what role do traditional offline marketing efforts still play?

Traditional channels are still important for us. Barter agreements with high-end magazines are particularly useful. These allow WAW to improve passenger experience with more offerings in executive lounges and VIP lounges, and, at the same time, advertise our business services in magazines.

At one end, people are saying traditional, offline marketing is dead. At the other end, airports such as Changi are investing in ever more unique experiences, such as an Enchanted Garden. What is your take on this?

At WAW, we look into developing projects that enhance passenger experience. For example, we cooperated with Warsaw Art School in promoting young talent by presenting their artwork to WAW passengers. What do you think are some key advancements in airport marketing?

In recent years, digital marketing has had a real impact due to its accountability and the ability to measure campaign performance. This led to a rapid cut in traditional marketing budgets. Airports are beginning to realise that ‘digital’ is not just another channel. It requires a new approach to marketing and a new understanding of customer behaviour.

Extending interaction with passengers beyond the physical realm

We know that your social activity gives you direct contact with your stakeholders – passengers, aviation enthusiasts and local residents. Do you see social media contributing more to business goals such as loyalty and advocacy?

We try not to bombard our fans with promotional adverts since this is frowned upon by the online community, but we do inform our passengers of special offers. We occasionally offer discount vouchers for the airport’s duty-free shops, available only to our Facebook fans.

We want to build a community by involving our fans in a debate about the role of the airport, sharing ideas on how to improve the quality of passenger service and celebrating important events together, rather than through advertising and promotion. This may not be reflected in our sales figures, but to us, social media is a means to build our community and image, not a sales channel. For instance, we have information for plane-spotters on our Facebook page.

Social initiatives are greatly enhanced by offering free Wi-Fi and it is now a must-have at airports. WAW too launched it this March. How has the take-up been?

While free Wi-Fi has been welcomed in general, some passengers – mainly international travellers are happy to have free Internet while others complain about the collection of identification data during sign-up, which we must collect according to Polish regulations.

What goes into social media success for WAW?

WAW is a social media leader in being responsive to passengers. What has been your most important success story?

Social media can be very useful for direct communication with passengers, particularly during crises. The severe winter of 2010 – widespread disruption to air traffic around Europe due to heavy snow – and the wheels-up landing of LOT’s B767 in November 2011, following the failure of its landing gear, are two of many examples.

How has your marketing evolved with the advent of social media? Do you have dedicated full-time personnel?

There is no dedicated social media team. One full-time person runs our Facebook page while I run Twitter. Colleagues from the PR department help us if necessary. We don’t offer a 24-hour service, instead we work on a ‘stand-by’ basis, especially
in emergencies.

What advice would you give to an airport thinking of launching a social media presence?

Start with a strategy. Ask yourself: why do I enter this world, what do I want to achieve and how? Further, cultivate your community, inspire it and meet its needs. But it’s not easy and success doesn’t come quick. Work hard and be patient.

Join in the #AirportMarketingX conversation!

Have a burning question that you’d like to ask about airport marketing?

Have an airport or executive in mind that you’d like to see in our series of ideas exchange?

We welcome your feedback and questions! Just tweet us at @simpliflying with the hash tag #AirportMarketingX, or leave us a comment on this blog post. The age of the connected traveller will be an exciting period not only for airlines but airports as well. Join us in the discussion today!