Flying is not something humans are naturally comfortable with. Many of us are also instinctively afraid of heights. As such, some of us refuse to get on a plane; others do it apprehensively — and some look out of the window and see an engine being “repaired with duct tape”.

This sight can trigger two reactions: an understandable fear for one’s own safety, and the need to tweet about it to let everyone know.

Always worrying when @easyJet are duct taping the plane together :-s #finaldestination pic.twitter.com/daYKgR9ssp

Faced with a fast-spreading image like this, many airline teams would have probably panicked or not reacted at all. EasyJet’s team, however, executed a good recovery. The airline found out what was happening and quickly started responding to tweets and explaining the situation. By doing so it was able to limit the damage and calm the nervous passenger. 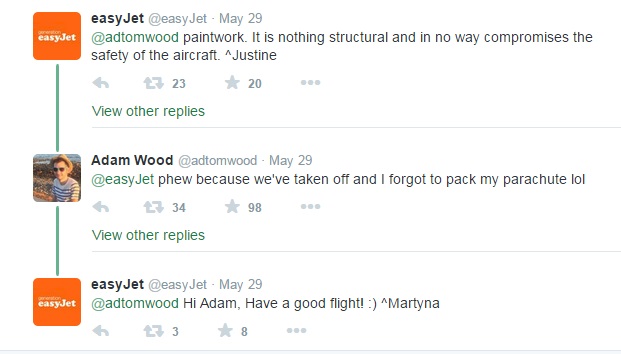 What the passenger saw was not duct tape but “speed tape”, a highly specialised material used for aircraft repairs. This tape is routinely used for temporary repairs. However, this incident highlights a larger “sensitivity” problem within the aviation industry.

By “sensitivity” we mean an overall lack of consideration for the perceptions of passengers, often driven by a technical mindset and rooted in the airlines’ boardrooms. In an age of constantly connected travellers, and ever-present smartphones, this lack of sensitivity risks undoing much of the good work done to establish our industry as a safe — some would argue safest — travel option.

Perceptions are key to decision making and as such cannot be ignored, even if the plane is, from a technical point of view, perfectly safe.

A Roadmap for Prevention

In this case, a greater focus on perceived safety could have translated into one of the following scenarios:

To prevent such situations from happening in the future, we recommend taking the following steps:

Do share your thoughts in the comments below, or tweet us @simpliflying. To learn more, You could also write directly to the author at marco@simpliflying.com.

Senior Consultant at SimpliFlying
Marco Serusi is SimpliFlying's director of consulting and has worked on major client projects with the likes of LATAM Airlines, London Heathrow and Airbus He has also delivered training in digital aviation strategy for hundreds of executives globally and spoken at several aviation conferences worldwide. He is well known for his cutting-edge research into crisis communications and social media trends. Serusi started his career in aviation after graduating in Air Transport and completing his Masters with a specialization in marketing. He is Italian who also speaks Spanish and English fluently and has lived in several countries including the UK, USA, Italy and Spain. He has been with SimpliFlying for over 6 years. You can talk to him in Italian, English or Spanish. You can also tweet him at @simplimarco, e-mail him at marco@simpliflying.com.