Marketing only stays relevant by recognizing the macro-trends that impact customers. Airline marketing is no different. Airlines know that travel has been on the minds of everyone, especially with all the restrictions and rhetoric since Donald Trump’s election as the US president. Taking a political stance in airline marketing can be risky, as it may offend some people.

Yet, four airlines have stood out in their efforts to pay heed to the winds and address the concerns their fliers may feel. We commend these airlines to have tried and largely succeeded, in showing how travel has changed the world in an irreversible manner. By taking a stand in the current state of political affairs, they would hope to attract loyalty from discerning passengers who go beyond prices when they choose their next flight.

Turkish Airlines is known for its daring marketing efforts that regularly go viral – from Kobe vs Messi to the magician who performed their latest safety demo. The airline ran an advertisement at Super Bowl last year and was back this year, though with a message we are not used to hearing from Turkish Airlines. Out with the fun and play. In with the somber voice of Morgan Freeman.

Indeed, Morgan Freeman stars in the latest airline marketing campaign from Turkish Airlines that was released at Super Bowl 51. And he speaks in his soothing, calming voice, about honoring differences and flying the airline’s network around the world (they fly to more countries than anyone else).

In addition to almost 800 million eyeballs that were exposed the advertisement at Super Bowl, almost five million people have watched it on YouTube alone. While it is a timely advertisement, it stands out as something very different from what we have started to expect from Turkish Airlines. There were no sports icons, no magic tricks. No scenes from their network around the world. Just a few shots of the cabin, some nice scenery and lots of Morgan Freeman. Perhaps that was the intended purpose of this airline marketing effort by the airline – to stand out from what they have done in the past.

Back when Trump talked about the #MuslimBan while campaigning, Royal Jordanian launched a campaign that chided the potential ban and encouraged travelers from the Middle East to visit the US while they still could.

The campaign generated close to 14,000 shares and likes on the airline’s Facebook page with more than 2.5K overwhelmingly positive comments to date. And like President Trump himself, Royal Jordanian’s highly unusual ad campaign made headlines around the world on Election Day and beyond and has been written up everywhere from Business Insider UK to the digitally native news outlet Quartz and even NBC News. That’s a lot of PR for an airline that’s not as often in the news as its competitors. This was featured as a case in our airline marketing benchmark report  in December 2016.

The best part is that Royal Jordanian just released a sequel to this hit! Just when there was a window of opportunity for people from a few countries to travel to the US, the airline released another salvo. And it’s working just as well as the last time.

Everyone knows that Trump wants to build a wall on the American border with Mexico. Yet, it is a fact that almost half of all Mexicans get to the US by air. Aeromexico took the high ground on the debate even before Trump was elected to office and came up with one of the best airline marketing campaigns last year. Created by Ogilvy and Mather Mexico, it talked about the virtues of travel and how it breaks borders.

While the video is not hosted on AeroMexico’s official channels, it has already amassed over 1.4 million views and is surely worth a watch. This was featured as a case in our monthly airline marketing benchmark report back in June 2016!

Earlier last year, Royal Brunei Airlines made waves around the world when they had an all-women crew pilot the 787 Dreamliner on a flight to Jeddah, Saudi Arabia. There are two significant milestones here. Firstly, it is rare to have an all-women crew in the cockpit anywhere in the world. Secondly, they flew the aircraft from Brunei (which had just implemented Sharia law), to Saudi Arabia, where women are not allowed to drive. It was the story of ambition and defiance of epic proportions and the world took notice. 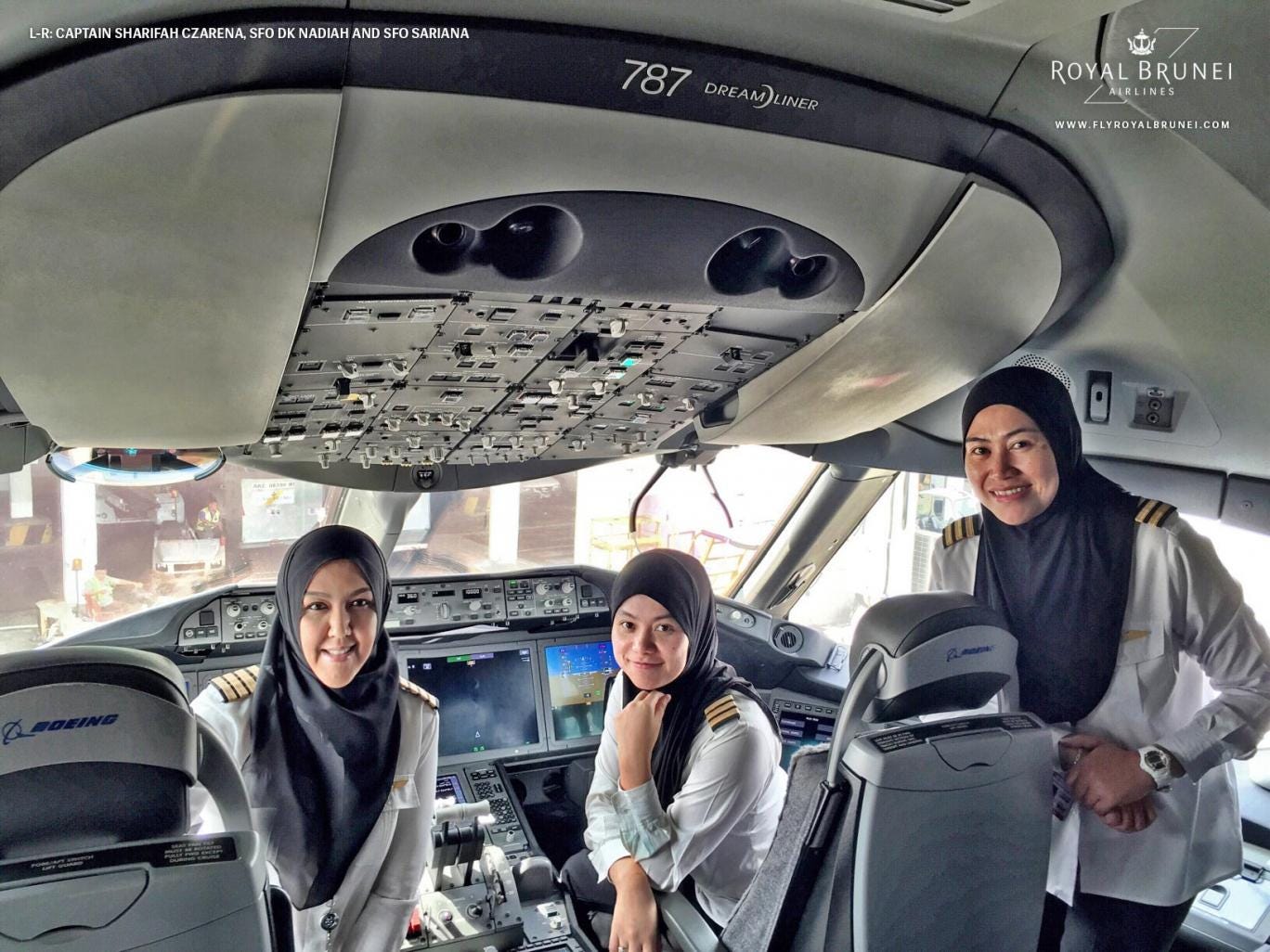 This was possibly Royal Brunei’s biggest PR coup in the last five years – the ladies were interviewed on Al-Jazeera, the news was in mainstream newspapers like the Telegraph and tabloids like the Daily Mail and more. The Captain of the flight, Sharifah Czarena commented, “As a woman, a Bruneian woman, it is such a great achievement. It’s really showing the younger generation or the girls especially that whatever they dream of, they can achieve it.”

When I was in Brunei last month, I spoke with the Royal Brunei executives to find out the story behind the marketing win. It turns out that this wasn’t a campaign that was planned months in advance or had the approval from several committees. Rather, a small group of Communications and Marketing leaders conceptualized it for International Women’s Day and put it out. They then basked in the glory of their efforts. Similarly, Royal Jordanian’s efforts succeeded due to a very quick turnaround. At AeroMexico and Turkish Airlines, some senior marketing leader bit the bullet and authorized agencies to executed on the strong political message.

In the future, the most successful airline marketing efforts will continue to reflect both the speed of execution and a strong stance. After all, a brand that tries to please everyone ultimately doesn’t end up getting business from anyone.

Do you know of other airlines that have taken a strong political stance in the recent times? Did it work or fail?