Who are the world’s biggest spenders when it comes to airport and in-flight shopping? According to Swiss research consultancy ‘m1nd set’, the answer is the Chinese, who account for 13% of all duty free sales (ahead of South Koreans with 5% and Brits with 4%).

This means Chinese tourists want nothing more than to shop, right?

Wrong.  Yes they are more likely to buy luxury items in airport retail concessions, and that in itself opens up opportunity for travel and aviation marketers.

But that isn’t the whole story, as a report by Agility Research shows, in many ways Chinese travelers are not so different to their peers from other countries.

Much like other nationalities, they value experiences over monetary purchases. 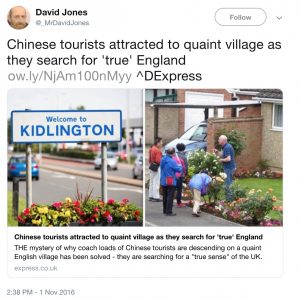 Ask the residents of the sleepy Oxfordshire (England) village of Kidlington, who have seen coach loads of Chinese tourists roaming residential streets, taking pictures of locals and even entering gardens.

Why?  Because the village is being marketed in China as the symbol of a “true sense of the country”, and “the environment makes you feel you are closer to the simplicity of your original self”, according to a tour guide interviewed by the BBC.

The village also happens to be on the way to the shopping outlet centre of Bicester Village, showing how ‘cultural experience’ and retail trips very much can work hand in hand.

As a result, while Agility Research’s findings show that 69% of affluent Chinese travellers prefer to go somewhere where they can buy luxury items, 93% said a “cultural offering” or experience was a factor when choosing somewhere to travel to.

When looking at which cultural experiences were the most important, local food and cuisine comes top for affluent Chinese travellers, followed by nature tours and safaris (in third place is outlet shopping).

How do you reach Chinese travellers, and offer these experiences to them?

Social media is of course important, with social media use in China differing from that in the West.  Unlike Facebook, which is largely blocked in China, Sina Weibo and WeChat, take the lion’s share of social media use, with 94% of WeChat users using it once a week.

However, the potential is also to reach passengers in-flight via the map, and to create more of an interactive experience – and to use it to drive ancillary revenues.

If Chinese travellers value cultural tours, especially involving food, above anything else then that’s the platform to do it on, while they are in the air and thinking of their destination.  And if they want trips to shopping villages (the 3rd most popular option), you can do that via an interactive map as well.

This article formed part of our March / April industry guide in Airline Marketing Monthly – Big Data, taking airlines places – which was produced in partnership with FlightPath3D.  To view the magazine and guide, click here.