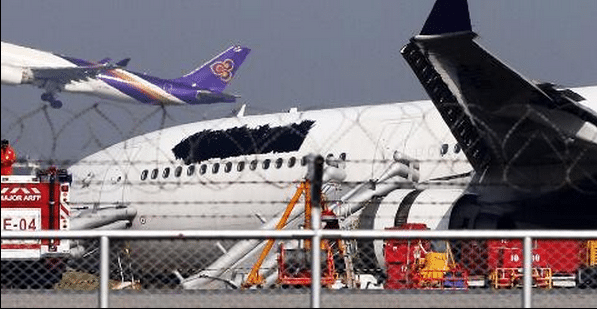 Last Sunday night, a Thai Airways Airbus A330 landing in Bangkok went wrong when the nose gear collapsed and the plane skid off the runway. Fortunately, only 14 people received minor injuries. Overall, Thai Airways did a good job of keeping the passengers, their relatives and media up to date with the latest information, online and offline.

Though, within hours, a bigger undercurrent emerged — that of the airline sending maintenance staff rushing to cover up its logo to supposedly avoid bad publicity. And that seems to have gone viral. Thai Airways official Smud Poom-On said that,

“Blurring the logo” after an accident was a recommendation from Star Alliance known as the “crisis communication rule,” meant to protect the image of both the airline and other members of Star Alliance.

This seems counter-productive in the Instagram Age, where the first few photos of the accident were on Twitter with a full view of the logo and the aircraft, like those below. Our very own Marco Serusi studied Air Transport Management in the UK, and his Airline Marketing professors taught him that in a crisis, airlines should cover up their logo as soon as possible. During a crisis situation airlines traditionally would try their best to keep their logo and other visual identifiers out of public eye. Spokespersons responsible for crises communications would never give any on-site interviews where the logo would be visible.

The history of airline accidents is peppered with evidence of such “cover-ups” – Eastern Airlines, in 1987, Air Algerie did it in 2006 and China Airlines in 2007. The latter’s cover-up had so much backlash that the patch-up job needed its own damage control! We also discovered some wisdom being shared on the topic on Airliners.net,

Blurring the titles is normal routine. in the old days before handling agents, when airlines had their own stations with own staff, there was always a bucket of paint or 2 on hand in the office and it was the station managers duty to make sure that as soon as it was possible to paint over the airline name.

The point is to keep the visual association between an airline’s most recognizable symbol (its logo) and a crashed plane out of the public eye. Merely mentioning the name of the airline in a report doesn’t create nearly the same level of memorable impression with the public.

Many observers were surprised by the swiftness of Thai Airways logo cover-up by maintenance crew. One reason for this can be the Asian culture of “saving face”, where people want to dis-associate themselves with an embarrassing situation as soon as possible. The fact that Star Alliance’s guidelines seemingly advocated the same probably hastened the procedure. Nevertheless, I’d like to question the effectiveness of such measures in today’s day and age.

Your plane crash lands. What’s the first thing you do? 1) Evacuate passengers 2) Cover up logo http://t.co/amLUNjPXXz via everyone

When the China Airline incident happened in 2007, there was no Instagram and Twitter was just getting started. When Eastern Airlines crashed in 1987, not even Myspace had arrived on the scene.

Today’s reality is that within minutes after an incident, if not seconds, “accidental spokespersons” are posting live photos, videos and information on to their social networking profiles. In the Thai Airways logo cover-up case, Twitter was flooded with details and photos of the accident just 18 minutes after the plane came to a stop. For the Asiana Airlines crash in San Francisco, it was a mere 20 seconds before a photo was up on Twitter!

The constant stream of real-time information from ordinary people using social networking tools ensures that the best media folks do not wait for an official press release from before publishing the story. They rely on citizen journalists. And since tons of photos were released on Facebook, Twitter and mainstream media in the hours after the crash, all bearing Thai’s livery in full view, it is a futile effort to cover up after thousands of photos have already been shared.

Some might argue that reducing visual brand association still works in the aftermath of an incident. However, today, airline marketing managers need to recognize that your brand is not what you say it is, it’s what they say it is. And that’s the reality of the Instagram age.

Perhaps someone at Thai Airways and Star Alliance needs to revise their crisis communication policies for the Instagrammers. If not, they can be assured that their attempts to pull up a crane next to a crashed fuselage just to cover up the logo attract just as much attention as the incident itself.

Update: Thai Airways has just issued the following statement, that it was not Star Alliance that forced them to paint the visual identity