Editor’s Note: This is a guest post by Vikas Bysani of Unmetric, an exclusive aviation partner of SimpliFlying. Unmetric is a social media benchmarking company that helps brands analyse how well they’re doing on social media by including in-depth insights into numerous metrics as well as information on what kind of content “works” and how competitors are faring. Among Unmetric’s list of illustrious clients are Toyota, Subway and Cisco.  [push h=”16″]

What is it with airlines and YouTube? They seem to produce viral videos at will. Air New Zealand brought out a Middle Earth inspired safety video, Virgin America an R&B infused safety video. British Airways had South African rugby players running against Airbus A380s, Turkish Airlines has enlisted the help of Messi and Kobe to run around the world. Southwest has a country singing flight attendant, AirAisa had a multi-billionaire drag queen flight attendant. Malaysia Airlines did a flash mob in KLIA airport, Hawaiian Airlines did a flash mob at 38,000 ft.

Last year, Finnair delighted travellers at Changi Airport in Singapore with Santa and elves delivering gifts.  This year, we have Canadian airline, WestJet, giving away even more free stuff to its passengers, as seen in its Westjet Christmas Miracle video (its marketing aspects have been analysed by SimpliFlying previously).

Before this video went live, people outside of Canada and the US might be forgiven for not knowing  who WestJet was. Over 14 million views later (and after being featured on sites like Mashable, Huffington Post, The Daily Mail, and LA Times) most people will now think of WestJet first when they consider flying in Canada. In fact, the article on Mashable has been shared over 1m times (which is apparently a first for Mashable) and has added further fuel to WestJet’s PR campaign for the video.

The growth of the video has been nothing short of spectacular, doubling every day for the last three days as this chart shows. 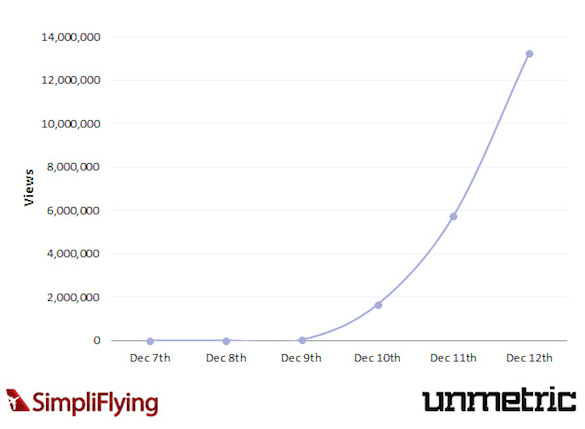 WestJet is no stranger to doing creative videos; a quick scan through its other popular videos shows flash mobs and an April Fools video announcing the launch of child-free cabins. However, despite doing well, none of these videos has seen the runaway success of the Christmas Miracle video. In fact, the video accounts for over 70% of the total views on the channel, which is incredible considering it’s just 3 days old.

The growth in subscribers has been astonishing as well. Before the video was uploaded, WestJet had a respectable 3,700 subscribers as of December 9th. Now, the channel has over 12,000 subscribers, a growth of 320% in just 3 days. 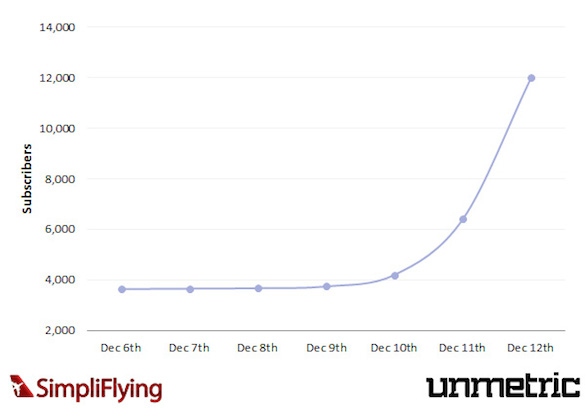 Over on Facebook, WestJet is no stranger to posting compelling content that engages its fans. In fact, in comparison with some of the beloved airlines in North America, WestJet’s Facebook page has yieled up to six times the engagement of other airlines. 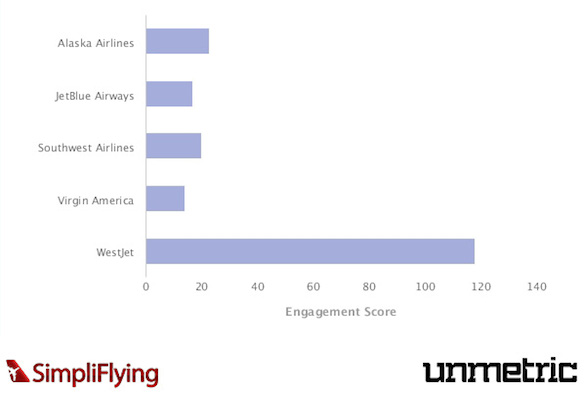 Before the video, WestJet was getting an average of 15 fan posts a day. After the video, well, just take a look at the chart below, which shows how many fan posts WestJet has received in comparison to other airlines in the past week. 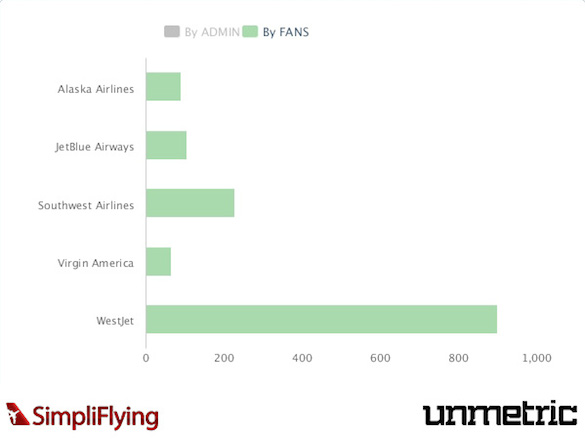 Over on Twitter, we were surprised that the most engaging tweet from WestJet wasn’t the original announcement of the video, but one of the follow up tweets which mentioned the number of views. This shows both the power of tweeting multiple times and the power of social validation (and FOMO) by including some numbers in the tweet. The original tweet had an engagement score of 808 (out of a possible 1,000), which was calculated by taking the number of retweets, favorites, replies and follower numbers. The follow up tweets scored 966, thanks to double the number of retweets.

Our #WestJetChristmas video has gone viral with over 1M views in 24hrs. Find out why: http://t.co/gOz88zDdzF

Just like on Facebook, WestJet’s Twitter account is no stranger to highly engaging tweets that are retweeted and replied to. The chart below shows how much more traction WestJet has made compared to other popular airlines (including a certain very large Canadian airline) over the last month when it comes to follower interactions on its tweets. 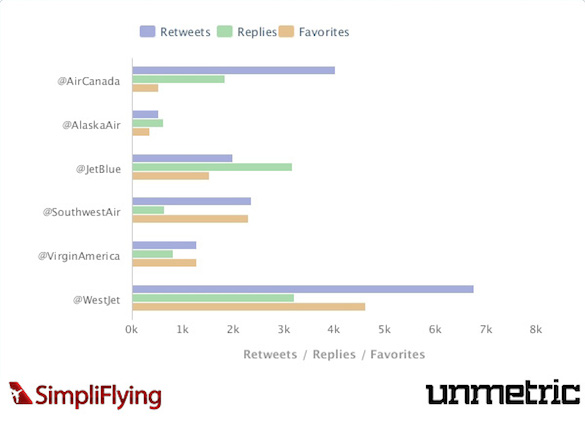 Quite clearly, WestJet’s social media pros are experts in creating highly engaging content and integrated marketing campaigns. However, the success of the Westjet Christmas Miracle video must have far exceeded even their own expectations, as evident in their recent “yay, go us!” blog article which talks about how their video went viral and well worth a read.

While it might seem absurd for an airline (which  as a sector, isn’t posting stellar profits at the moment) to be giving away so much, including a nifty 50 inch TV, we think the WestJet team really knocked it out of the park on this one.  Thirteen million views and global press coverage later, we think the entire marketing team needs a damn good Christmas bonus (we hear they sell big screen TVs at Best Buy.).

All data has been compiled and analyzed from the Unmetric platform which tracks dozens of metrics to enable brands to benchmark themselves against competitors and their industry sectors. The period analyzed is 12th November to 12th December, 2013.

Vikas Bysani a Marketing Executive at Unmetric. Loves long walks on the beach and hates cliches. Data is kinda his thing. Also a diehard Simpsons fan.