Editor’s Note: This is a guest post by Martin Daniel of Unmetric, an exclusive aviation partner of SimpliFlying. Unmetric is a social media benchmarking company that helps brands analyse how well they’re doing on social media by including in-depth insights into numerous metrics as well as information on what kind of content “works” and how competitors are faring. Among Unmetric’s list of illustrious clients are Toyota, Subway and Cisco.  [push h=”16″]

Ever since the Cluetrain Manifesto revealed that ‘markets are conversations’ and ‘silence is fatal’, the emphasis on conversations between brands and customers has never been so vital. With the advent of social media, real time communication has become the norm and the customer service bar has been raised again and again. Providing customer service via online channels has not only become easier but also very demanding as a brand’s customer service excellence or rather, its very reputation hinges on its ability to respond to customers’ queries in real time.

With Twitter increasingly used as the primary channel for customers to communicate with brands, its 140 character limit has made it an art to master for quick and effective customer service. If there is one sector which has leveraged Twitter for real time customer service, it is the aviation sector. Air travel is stressful and queries of all types are aimed at the airlines with an expectation of clear, quick and appropriate responses.

We, at Unmetric, did an in-depth analysis using the arsenal of tools in our platform and found out that American Airlines seems to have mastered the art of customer service on Twitter in the aviation sector. To put that statement in perspective, American Airlines replied to a whopping 30,474 tweets at an average reply time of 12 minutes in November 2013. As shown in the above chart, none of the other airlines comes even close to amount of queries handled by American Airlines. The airline responded to 76.5% of the mentions during the time period analyzed, which is more than twice the North American aviation sector average of 34%.

The correlation between the mentions of @AmericanAir and tweets by @AmericanAir has been very consistent as shown below. Whenever there is a mention of @AmericanAir, the airline goes all out to either acknowledge it or to resolve a customer query. American Airlines sure knows that being silent is fatal and responding to customer queries is the first step in resolving any issue. 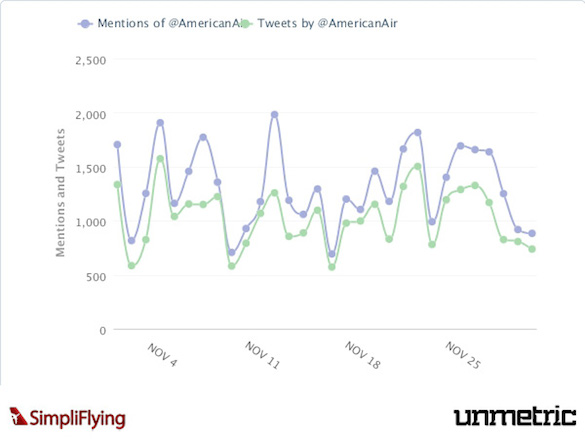 American Airlines has the highest mentions count in the aviation sector with 39,296 mentions during the time period analyzed, which is more than 19 times the sector average of 1,994. They also hardly let a query go unanswered more than 15 minutes of it being asked, as shown below. Only 2,634 queries have gone beyond the 15 minutes range among the 30,474 queries answered. This tells a lot about the swiftness of the organized and dedicated team at its Twitter command centre. 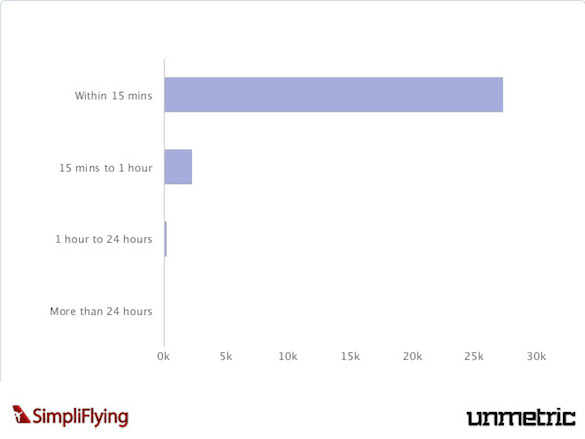 The number of queries peaked between 9AM and 4PM on an average on any given day and American Airlines matched it with super-fast replies which are evident in the short average reply times during the same period as shown below. Fridays seem to be the busiest day of the week for @AmericanAir and once again the airline efficiently replies to more than 5,700 tweets with an astounding average reply time of just 8 minutes. This shows just how well the airline is equipped to handle peak time traffic on its Twitter handle. 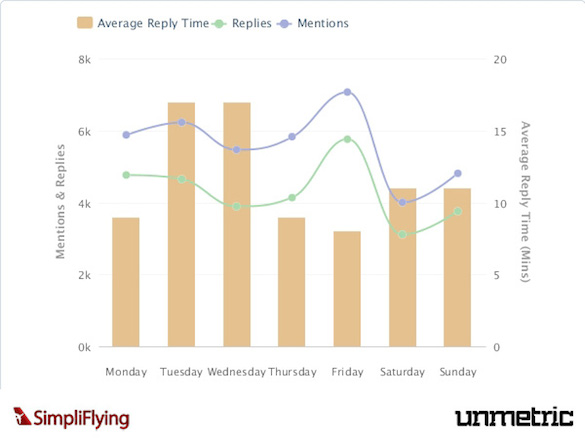 Apart from replying to a huge number of queries in record time, American Airlines also tweets extensively about its campaigns, even though these proactive tweets form just 1% of the total tweets during the time period analyzed. 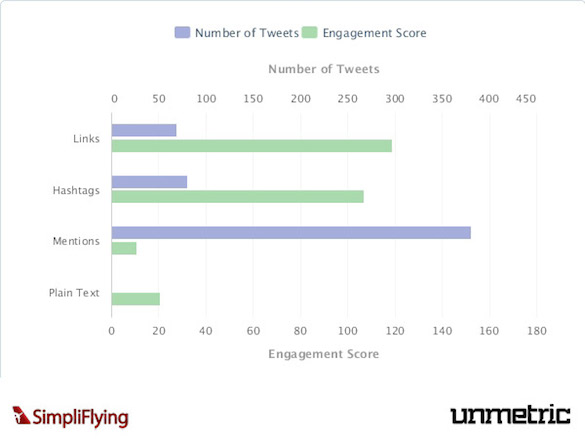 The tweets around the FAA approval to use portable electronic devices on flights saw high engagement with the hashtag #gatetogate being the most engaging hashtag for the brand in November with an engagement score of 526. Disclosure:  American Airlines is one of Unmetric’s clients, but that had no influence on the article. The data speaks for itself.

Unmetric compiled this report by sourcing data from its own social media benchmarking platform. Data and Insights on American Airlines’ activities on Twitter were analyzed for the month of November, 2013.

Latest posts by martindaniel (see all)