Editor’s Note: As part of our SimpliLeader series, in which we showcase the best minds in aviation, here’s an interview with Mike Tod, Chief Marketing and Customer Officer, Air New Zealand. This interview originally appeared on LinkedIn Pulse.

Mike answers a few questions about the latest safety video “Safety Safari” and the work of the airline’s award winning Brand team.

But first, a little about the video itself in which Air New Zealand has assembled some of the greatest surfers in the world to deliver its latest on board safety video, filmed at legendary surf breaks across three countries.

Watch the video below.

To celebrate the launch of the Safety Safari video, Air New Zealand is giving viewers the chance to win a surf lesson for two with legendary big-wave surfer Laird Hamilton in Malibu, including round trip Premium Economy airfares to Los Angeles, 5 nights 4-star accommodation in Santa Monica, and a rental car for 5 days. Enter the contest here.

Would Surfing Safari be the most challenging safety video production yet?

Without a doubt! The team did a phenomenal job over a couple of months securing some of the greatest surfers of all time like current World Champion Brazilian Gabriel Medina, three-time World Champion Australian Mick Fanning and American big wave legend Laird Hamilton. The total surfing cast numbers around nine people and includes New Zealand surfing greats like Maz Quinn, Paige Hareb and Ricardo Christie plus one of the most popular female surfers on social media, American Alanna Blanchard, who has also done design work for Rip Curl.

I’ve been asked, “Where’s Kelly Slater?” We would loved to have had him on board and his representatives were great to deal with. However, we just couldn’t get the stars to align.

Once the cast was lined up, we settled on the destinations for the safety video shoot – Malibu in the United States, the Gold Coast in Australia and Raglan and Piha here in New Zealand.

Then the production team were pretty much hooked into online swell maps like they were on an hourly drip! Our greatest fear was hitting the production go button only to find out we had no waves in each location. Furthermore, in our backyard of Australasia there was the not too small matter of a cyclone and the impact that would have on the shoot.

As it turned out we got both good waves and weather in each shoot location. It would be fair to say there was a pretty big sigh of relief once the camera stopped rolling for the final time. 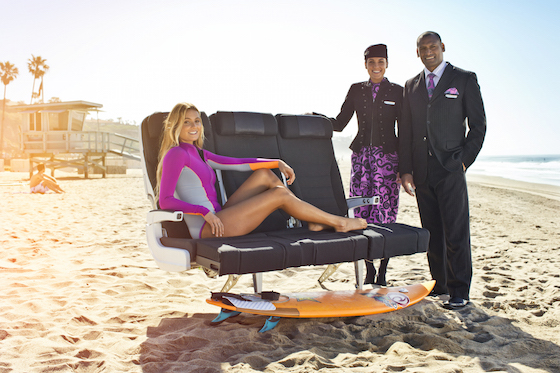 Air New Zealand has set the global benchmark for innovative safety videos. Where do the creative ideas come from?

We’ve pretty much had the same small core group of people throughout the evolution of the videos from both within the Brand team and at our agency partner True. The ideation process is quite organic and everyone has an equal voice. Going into the process the core objectives are clear:

The videos have certainly got their fair share of headlines over the years.

Without a doubt. Air New Zealand is a small airline at the bottom of the world. We have to do things differently to get noticed and talked about. We play in some pretty large and competitive offshore markets and we don’t have the big budgets of many of our competitors to get noticed. So we play to the essence of our brand, which is to be liberating from the ordinary. And because there is nothing ordinary about our safety videos these capture not just our customers’ attention but that of international media, too. Our safety videos have featured everywhere from CNN to national news outlets in Australia, the United States, the United Kingdom and Asia. Plus a bunch of countries we don’t even fly to.

Then there is the whole social media and online dynamic. The level of engagement we get is outstanding and the current number of online views of our videos is sitting somewhere in excess of 45 million.

At the core of our leverage success is our ability to be able to take a great piece of content and pull the marketing, PR and social media levers in unison across each of our markets.

Definitely. The mix of celebrity talent and big brand partnerships puts fuel on the conversation fires.

The safety video that we shot in conjunction with Sports Illustrated in Aitutaki in the Cook Islands was an excellent example of this. Leveraging the reach and power of an iconic partner brand gave us that extra edge. `

In this latest video we again have a collaboration with Sports Illustrated but also the support of other partners like Red Bull, Rip Curl, GoPro and Tourism New Zealand. Between these organistions they have massive social media reach. And the same goes for many of the surfers in the video. Alana Blanchard has more than 1.7 million Facebook fans and around 1.1 million Instagram followers. Gabriel Medina has around 1.8 million Instagram followers. These are pretty mind boggling numbers and when the surfers take to their social channels to talk about what they have been doing with Air New Zealand it gets both the airline and the destinations we fly to into the minds of potential customers.

So, do these safety videos actually drive revenue, too?

Absolutely. What we have learned with recent videos like our final Hobbit instalment and the Sports Illustrated collaboration is that these pieces of content can put bums on seats. Our Market Development teams here in New Zealand and offshore are integral to the activation phase and wrap offers around the safety video content launch. We saw a significant spike in sales to the Cook Islands immediately following the launch of the Sports Illustrated collaboration and we had an online sales day record in the US when the latest Hobbit safety video launched. Interestingly, in the period following the launch of the Bear Grylls fronted video shot on the Routeburn track in the South Island, the Department of Conservation saw the number of people using the Great Walks increase by more than 10%.

So, coming back to Surfing Safari, it was by design, not accident, that the three locations used for the video are basically on or around the Air New Zealand network.

For example, looking through the lens of New Zealand based customers, our hope is that we inspire them to think about taking a winter break to the sunshine of the Gold Coast or California.

And then looking at New Zealand through the lens of those living overseas – we’ve shown a side of New Zealand and a warmth of personality that we hope will push consideration of our country up the list of destinations they are thinking about for their next holiday.

Producing these videos must be expensive.

I think people would be surprised by what we achieve on the budget we have for each video. While the videos have high production standards, there is a fixed budget for each one and that has to cover everything from the creative process to talent fees, production and leverage activity. So, yes, the videos aren’t cheap to produce but not anywhere near the cost of some numbers that get bounced around.

How do you balance the need for creativity with engaging customers in the safety messages?

The New Zealand Civil Aviation Authority sets clear guidelines on what we must deliver and has been excellent in allowing us to use creativity to engage customers in safety videos. Without its constructive support we would not have achieved the customer engagement or global attention we have.

What’s your role in the safety videos?

Our Head of Global Brand Jodi Williams likes to quip that I’m the chief risk manager. Ultimately, accountability for the success or failure of the videos sits with me. I tend to be reasonably hands off in most of the process. The points in time when I get involved are in the discussion (and sometimes quite lively debates!) on the selection of the preferred creative territory, celebrity talent and music track. Then it’s really at the backend when the team is going through the final stages of the editing and approval process.

It must be hard for your team to keep up the global success of these safety videos.

To be honest that conversation doesn’t really get any airtime. The team is always looking to push the boundaries and has an appetite for risk, so it is looking into the future and not back at the past.

I have a personal bias for this latest video given my love of the beach and the fact that I spent some of my best childhood years growing up on the Gold Coast where my parents and sister still live. But putting that aside three safety videos in particular really standout for me. Air New Zealand’s first one with staff in body paint redefined safety videos. The one with Bear Grylls on the Routeburn Track makes the list because it took viewers outside an aircraft and engaged them in a visual feast of the best of New Zealand. Rounding out the three is our second Hobbit safety video. What an epic shoot and amazing cast! Peter Jackson’s appearance was the icing on the cake.

Surfing Safari is going to be a hard act to follow. What’s next?

We should start production on the next video within two months. We’re in the final phase of settling on the creative idea and negotiating with some household names who we would love to have on board.