Airline Disruption Management in the Age of Hackers and Connected Travellers

Last weekend, three separate airline disruption stories hit the news, all in the space of 48 hours.

News of the LOT system hack was a first, but the results of all these disruptions were the same: delayed, unhappy passengers and a serious problem for the airline.

The hacking incident presented two new challenges to the airline.

Firstly, it was a disruption never seen before in the airline industry, one that sat between a traditional disruption event and a full-scale crisis.

Secondly, it had an added fear factor for the general public related to the aircraft’s safety and potential terrorism issues. 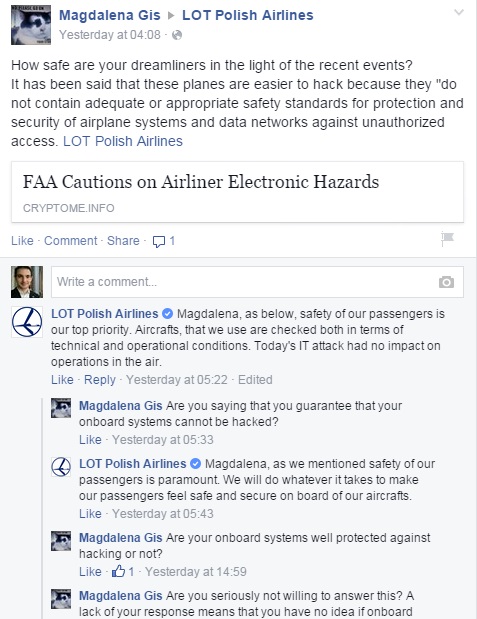 The airline did a good job at managing both sides of the crisis. It provided updates about the delayed flights and informed users of what was happening. As is often the case, social media provided an ideal platform to disseminate news. In many cases passengers at the airport used it to find information that was not being provided locally.

The airline communicated effectively. It clarified from the start that the hacking had not affected the IT system of the aircraft — only those of its ground operations. People who took their concerns to Facebook  also received prompt replies from LOT’s social media team.

The Scoot case stood out for two reasons. First, because of the communication problems between the airline and its passengers that led to confusion. Second, because of how quickly a Facebook message posted by a flight attendant spread.

Scoot faced a technical problem with its aircraft, followed by a lack of available crew for the flight. These eventually caused the flight to be delayed by a total of 22 hours. In between, the passengers had been instructed to disembark twice from the aircraft. Given the high internet and social media penetration rates in the island nation, it was not surprising to see passengers frequently sharing images and videos on social media.

In one of the videos, a passenger instigated other Scoot customers to post on Facebook and Twitter as a form of protest. Other passengers noted the euphemistic language used in the airport’s display where the delayed flight was described as “retimed”.

While the airline could have — and should have — expected passengers to be complaining on Facebook and Twitter, it probably did not expect the widespread sharing of a comment made by a flight attendant. 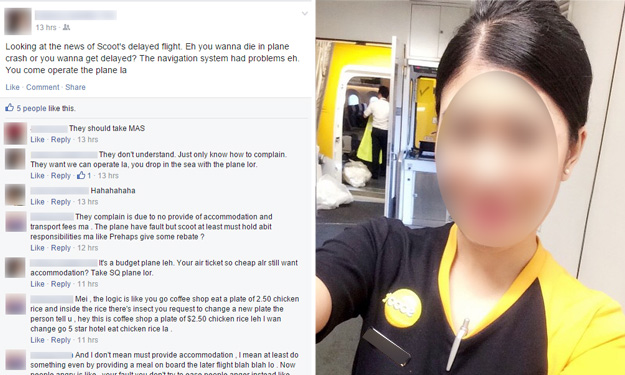 To a sympathetic reader, the post reads like an attempt to defend her airline from unfair comments. It is akin to a visceral reaction that one might have if a friend had been insulted. It’s an understandably human emotion and, as can be seen by the privacy icon on the leaked screenshot, it was never meant for the general public. (The icon denotes a “friends only” visibility meaning that someone within her network must have taken a screenshot and then posted it online.)

Several days later, Scoot released a statement from its CEO, in which he explained the events and apologised for the inconveniences caused.

Scoot deeply regrets disruption to guests affected by the flight delays over the weekend. We sincerely apologize for the…

Had the CEO statement been provided on the day of the event, it likely  would have reduced the impact of this crisis for the airline. Messages like those from the flight attendant might not have been posted and would have instead been replaced by the CEO’s message.

At their core, the crises have a need to reassure passengers and keep them calm in the face of something that is outside of the airline’s control.

In such situations, it is important that airlines have an effective communication system in place, one that is based on a “human” way of communicating.

This means that the airline would have to behave and respond the way a human being would when talking to another person. It means providing honest replies, sharing available information and being able to adapt to a changing and unexpected situation. Flexibility and adaptability are key human qualities but also something airlines struggle with.

Learning to be flexible

As an industry, aviation has built a strong safety record by learning from mistakes. But that this same learning cannot often be replicated outside technical and operational areas.

This is important because the industry has built its improvement process on strict rules, checklists and exact specifications. In doing so, it created a system able to deal efficiently with technical or operational improvements but also a perfect recipe for communication disasters.

Moving forward, airlines will have to change this modus operandi in favour of modern airline disruption and crisis communications. A key element will be the provision of considerable freedom to front-line communication agents, backed by solid training.

With senior management support and appropriate training, staff such as community managers and customer service agents will be able to defuse many of these disruption or crisis situations before they hit the headlines.

Of course, such issues will also need to be defused on the ground. To do so, it will be necessary to establish direct communication between the “digital front line” staff and the ground-staff.

For more on airline disruption management, see our presentation; understand the importance of communicating the differences between Accidents and Incidents; or sign up for our Crisis Communications Report. For more information, write to marco@simpliflying.com.