How to Make Apology Marketing Work for Your Airline

Last month, I flew for the first time on GoAir, a domestic low-cost carrier in India. It was also the first time I heard a strange announcement that seems to be the practice on GoAir flights. I’m recalling from memory so do allow for some loss of precision:

Ladies and gentlemen, we understand that you have a choice when you fly. Hence, we are thankful that you chose to fly GoAir today.

Undoubtedly, the competition between airlines in India is stiff — the market is led by the much-loved low-cost carrier IndiGo (with almost 40% market share), and has recently seen new entrants such as Vistara and AirAsia India. However, is that a good enough reason to point customers to the competition so explicitly, while they’re on the flight?

Here, briefly, is what I think the people at GoAir must have been thinking — let’s be humble, let’s accept the competition, let’s deliver good service (which they do!) and people will certainly come to us. Fair points. But do you need to be apologetic about being a small airline in a sky with larger airlines? I felt the airline appeared like it was trying too hard to either play the underdog card, or was insecure about itself. It might have left a more positive impression by simply re-stating the USPs of the brand.

When Should You Resort to Apology Marketing?

While the above instance left a mixed, mostly negative impression, apology marketing should not be dissed outright.

What is apology marketing? While not strictly a marketing concept, it can be loosely defined as any attempt by a brand to reveal or accept its shortcomings/mistakes publicly, thereby showing a human aspect to the brand in order to gain customer sympathy and support.

As airlines and customers interact more closely than ever in the age of the Connected Traveller, there a few ways in which apology marketing can be used non-cynically to build trust with customers.

But first, here’s one way to not go viral if you’re trying to apologise:

For apology marketing to work:

1. The apology must appear genuine, clearly explain the situation in an attempt to engage, and not just be a standard application of policy. In the recent Scoot 22-hours delay incident, the CEO wrote a long post on Facebook explaining the cause of the incident and apologising for it. While it can be criticised for having come a little late, it’s undeniable that the message is transparent, well-worded and doesn’t attempt to be mere PR fluff.

2. It must be prompt and not come as an afterthought or as a half-hearted attempt to save reputation. American Airlines’ Twitter account is a great example, offering prompt social customer service. It’s worth keeping in mind that mostly your customers will be upset about the small, day-to-day things that must, nonetheless, be addressed effectively. For those travelling, especially, nothing matters more than a quick response that says someone at the airline is listening and is there to help. (See a few examples here, here and here.) 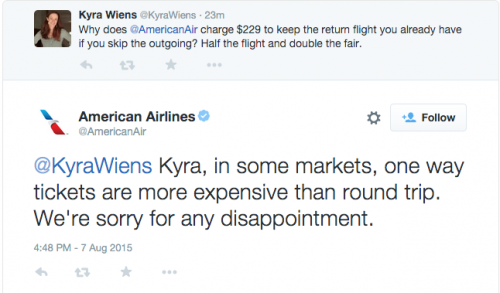 3. The apology must be followed by actions that support the apology. All words and no action do not an apology make. For instance, when a special fare by Southwest Airlines caused an IT glitch that caused customers to get over-charged, they were quick to respond and offer refunds — in some cases they even covered bank over-draft charges. Unsurprisingly, the response saw tremendous goodwill from customers.

In times when connectivity is a given, when messages can be exchanged instantly, and complaints posted publicly, it is in the interest of airlines to seriously forget outdated policies.

Gone are the days when airlines could choose to offer slow resolution to complaints, or even completely ignore them. Today, customers control the conversation.

Offering a public apology is a way to both humanise the brand, soothe upset customers, and simultaneously gain the support of online advocates. Social media can be surprisingly forgiving if a brand swallows its pride and apologises to customers. Is your airline ready to take this leap of faith?

Share your thoughts in the comments below, or tweet us @simpliflying. You can write to the author at shubhodeep@simpliflying.com.