Five Years with SimpliFlying: Around the World in 1826 Days (and counting)

This piece should have been the easiest to write. After all, five years gives one a multitude of experiences (and insights?) to choose from. Instead, I’ve lingered the most on this one — etching and, subsequently, scratching out thoughts; adding and erasing ideas; searching and trying to pin down exactly what it is that I wish to say. Each time that I began writing this over the past couple of days, I found myself at a new starting point, stumbling upon a new way to begin narrating what five years at SimpliFlying have meant for me. Ultimately, I decided that each of those beginnings to this piece deserved to be here. So here they are, each of the five openings for this anniversary piece.

1. In the summer of 2010, while at college in Singapore, I applied for an internship at JP Morgan. I was successful in each interview round, until a bizarre mix-up at the company’s end snatched the offer from my firm grasp. I was disappointed and angry and decided to go home to India for the summer instead of applying to other internship. I was still pondering my prospects a couple of days later when another meeting that hadn’t borne fruit until then, flowered:

I accepted because I was told location did not matter. I could be home.

During the summer, my grandmother passed away. I had been her favourite, and was exceedingly fond of her. Her passing made me ever more grateful for the rejection at JP Morgan, and came as a reminder that SimpliFlying had given me what no other company could have: priceless moments with my grandmother during her final days (I’ve written more about this here).

2. A month or so ago, I was at home, in Dehradun — a small town at the foothills of the Himalayas. This was an overdue rest after a whirlwind round-the-world trip (see below). I had gone running early in the morning with three friends. We were now lounging in the early morning silence with chai and Maggi (two favourite Indian pastimes), our chatter interrupted only by the occasional chirping of birds, or a car passing by. The valley stretched out beyond. Everything seemed perfect.

This was only until I realised that the next day, two of us would return to the thrum of everyday corporate life in Delhi, while the two of us who worked at SimpliFlying could continue being here, doing this, for the rest of the autumn if we chose to.

3. In early October, I shared the following update on Facebook, as all dutiful citizens — after all it would be the largest country in the world by population — of Facebook should. (Do read the comments if you can!) By then (as a conversation with a cousin reminded me) I had already visited 27 countries over the past 4 years. Strangely, the US had not been one of them. This one, too, would soon be ticked off the list. And that too on a magnificently globe-encompassing trip, thanks to a SimpliFlying event that we were organising for the first time ever — that too in Las Vegas! I wonder if it gets any more heady than that. In Seattle, I met a friend I’d made while travelling in Croatia earlier this year. She asked me if I was still at “that cool job that lets you travel and work from where you like”. I told her I was.

How wonderful to see the world, new faces, new people and to then see them again in newer places, but with a familiarity that was bred thousands of miles away. As I’ve met with my colleagues in new and far-flung places — Las Vegas, Budapest, Singapore, Valencia, Sri Lanka, Istanbul, that feeling has only deepened. Here, at SimpliFlying, we see the world as much as the world sees us.  Here’s a snapshot of my colleague Li Guen and I cycling across the Golden Gate Bridge in San Francisco:

Cycling across the Golden Gate from San Francisco to Sausalito. A photo posted by Shubhodeep (@diaporesis) on Oct 17, 2015 at 8:30am PDT

4. When I started at SimpliFlying, I was clueless. What I carried with myself though, was an abundance of interest, enthusiasm and willingness to learn and do anything that was required. Over the years, at SimpliFlying we’ve found that our attitude more than aptitude (to drop in a tired cliché) has helped us through everything. From learning technical aspects of WordPress sites (such as PHP coding); to writing and designing brochures; to delivering keynotes and workshops; to sending invoices (and making life hell for those who didn’t clear them); to working on live consulting projects, I’ve done all this and more.

When I started, we had a handful of clients and a globeful of ideas. Some succeeded, some failed, and we accepted both with equal good humour. However, we never stopped moving. Every year, we’ve tried to do something new that has made a dent in the industry, made it look at us with admiring eyes and accept us as the cutting-edge strategy firm in aviation marketing that we are! It is only fitting then, that this year (my fifth), we held our largest, most ambitious event ever at Las Vegas.

A personal note: I showed the video below to a number of people and they all remarked on how much my public speaking has improved (I can do better, I’m sure!). Yes, SimpliFlying has been about courage, ideas, enthusiasm, travel, humour, camaraderie, excitement, innovation. But most of all, it’s been about growth — our growth as a company; the growth in our reputation; the growth in the quality of our work, its expanse, its depth; the growth in number of people working with us; and not least, personal growth for each of us.

Also, easter egg below. I think I’ve managed to work on most of these: 5. I was born into a middle-class family in a small town at the foothills of the Himalayas, in India. We had enough to fend for ourselves, but never in excess. Managing budgets was a monthly obsession, and my parents and grandparents even skimped on some essentials so that I could get a good education, and all my needs were sufficiently taken care of. We barely took any holidays, and I remember how, at one point of time, even a Domino’s pizza used to be a luxury.

That’s no longer the case, but I am not any less thankful for what my parents have done for me. In the new year of 2014, I took them for a six-country tour — Australia, New Zealand, Malaysia, Indonesia, Cambodia, and of course, Singapore. We ended with this, but I missed a crucial thank you note which I wish to deliver now — to SimpliFlying! 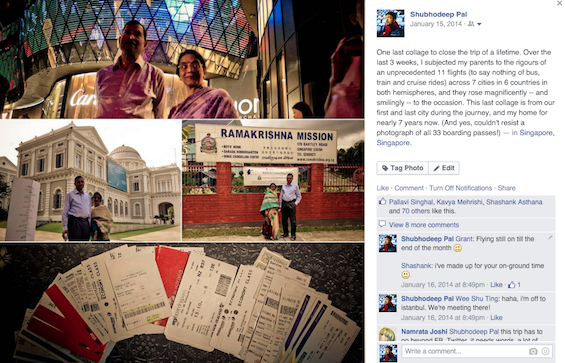 I mentioned above that what has mattered most has been growth. The truth, of course, is slightly different. What has mattered most has been family — and SimpliFlying, most of all, is family. We work, laugh, lament, crib and celebrate together. We stand up for each other, and have faith in each other. Even more, perhaps, SimpliFlying has allowed me to spend much more time at home, with family, enjoying moments that would have been forever lost to me had I been in a “regular” corporate job. And, of course, pursue other interests of mine, such as my collaborative “poetography” project.

Speaking of family and growth, it is only fitting that both receive a mention here.

Shashank, our CEO has been the guiding light, constant in his enthusiasm and faith in our endeavours. His tremendous reserves of energy (see his travel schedule for more evidence) have always awed us, as have his charisma and sales abilities. As the years have passed, I’ve seen him transform into a better leader, calmer in his instincts and surer in his handling of issues. An inspiration always!

Marco, our Senior Consultant, is actually the backbone of all consulting efforts and has nearly single-handedly taken it from strength to strength. Clarity of thought and the ability to structure arguments are his forte — as well as an unflagging enthusiasm to lead the good life. Over the past four years, he has grown into a more patient, articulate communicator, while ensuring that good humour doesn’t get lost.

Guen, our Comms Lead is much more than that, literally the conductor of the symphony that is SimpliFlying, ensuring that chaos doesn’t ensue and everything keeps moving harmoniously. Her ability to pursue projects to the end; her attention to detail; and willingness to work hard, while being cheerful, have made her increasingly indispensable to the company.

Ravi, our Analytics Lead has taken SimpliFlying to an entirely new sphere, again mostly on his own. His desire to grapple with data and evidence is legendary in the company, as is his ability to deconstruct arguments. Over the past two years, his biggest achievement perhaps has been moving from aggressive scepticism to calm action. (Disclosure: I have known him closely for the past fifteen years or more.)

You might wonder where, after five beginnings, the rest of the piece is. But then, this piece was always going to be about beginnings. We are at five, and we have much longer to go.

As one of my favourite poets, Wislawa Szymborska, has written:

“Every beginning is only a sequel, after all, and the book of events is always open halfway through.”