Duncan Bureau on leadership, culture, MH370 and why Air Canada Rouge is a success #SimpliLive 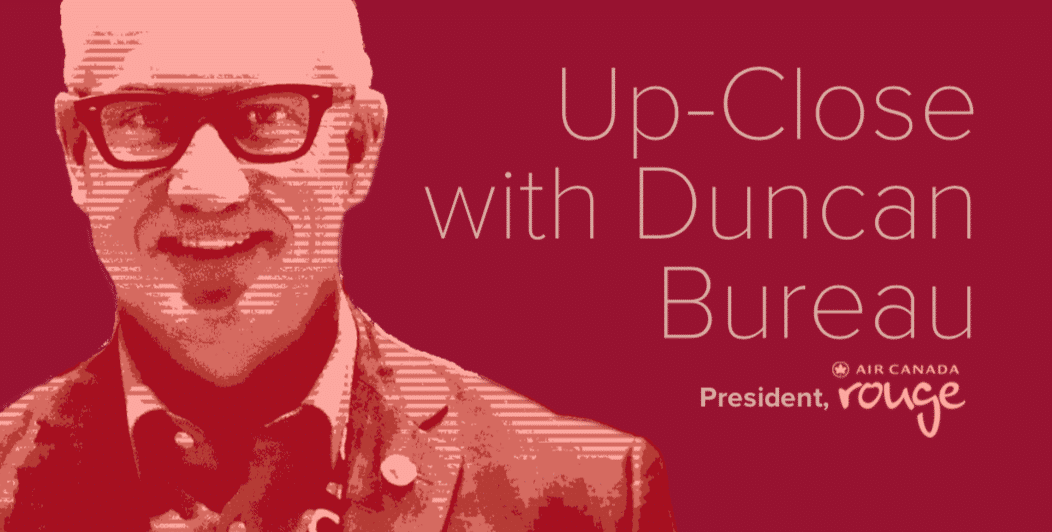 People work with you. Not for you. – Duncan Bureau

If I told you that a young man who joined an airline in finance would go on to lead sales for another airline, lead an airline through a crisis and ultimately go on to become President at another? As unlikely as that may sound, it is true. In fact, that’s the story of Duncan Bureau (Twitter, LinkedIn), who is now President at Air Canada Rouge.

I first met Duncan in Singapore, not long after the MH 370 tragedy. While we were chatting over a bowl of soup, he mentioned something that stuck with me. I was talking about the grief of the passengers. Duncan highlighted that most outside the industry don’t realize that, “there were a lot of crew members who lost their friends too.” After all, Malaysia Airlines was not a very large airline and the family-like feel still existed. I realized then that I was speaking with someone who connects well with his team and has a lot of empathy.

It’s the empathy that makes him very popular at Air Canada and Rouge too. I witnessed a surprise anniversary celebration for a staff (I was the bait!) when I was there. We spoke about MH370 and how it changed him as a person.

Duncan is a leader who believes in cultivating the right culture for fostering growth – of the airline and the staff. Air Canada already had a good culture. But Air Canada Rouge, as a new airline made efforts to build a distinct culture of its own. We dived deep into the cultural aspects of leadership in our chat. In fact, Duncan’s primary belief when it comes to leadership is that culture trumps strategy.

If you only have a few minutes, you should definitely listen to this segment on leadership and culture.

At the Air Canada Rouge headquarters, Duncan and I had a long chat on his career journey, how he was guided and mentored and how he leads his team. In this episode, we cover a number of topics and stories, including some he’s not discussed publicly before. Here’s a small sample:

Hope you enjoy our open chat below.