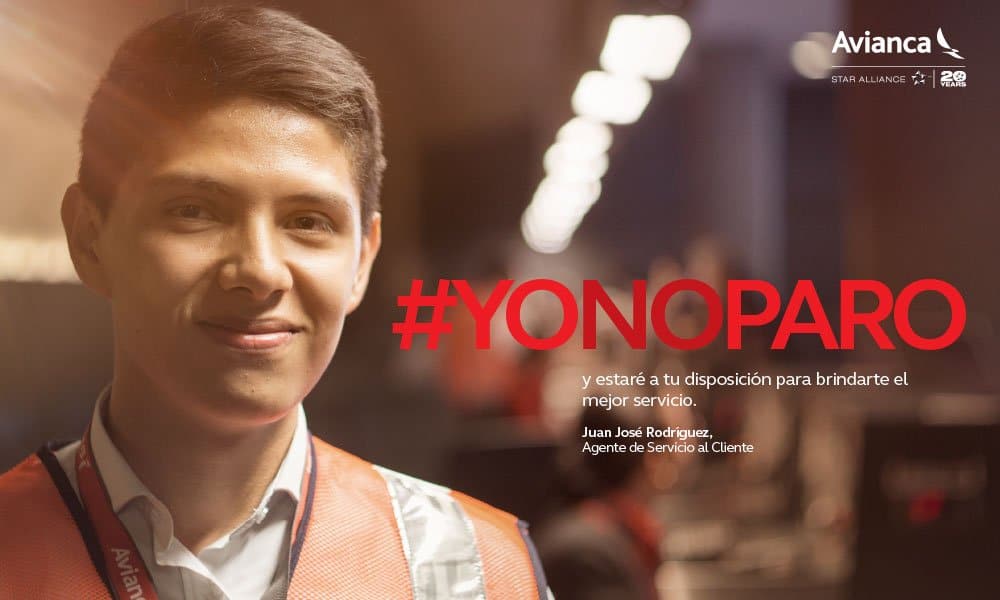 This year Avianca submitted an exciting nomination for the SimpliFlying Awards 2018 category Best Airline in Social Care. Their #YoNoParo campaign was not only awarded highly commended by the awards jury but is also a great case study for crisis management for building a branding opportunity in the middle of the crisis. We reached out to Sandra Patricia Alvarez Quinche, Global Social Media Coordinator at Avianca, to find out more details.

Q: Can you give us a short background of the situation?

A: In September of 2017, we faced the hardest and largest crisis of the aerospace industry worldwide. After unsuccessful negotiations, ACDAC, a pilots labour union in Colombia, began a cessation of activities, forcing the company to stop selling tickets for almost 2 weeks, cancelling about 20,000 flights and stopping the transportation of more than 520,000 people.

Q: How did you come up with the idea of the #YoNoParo campaign?

A: This campaign was created with the support of Avianca’s creative agency. We realised that our travellers should know our position against the Illegal Cessation of Activities by the ACDAC pilots, and have to be informed about what would happen with our services.

Q: What was the main message you were trying to transmit?

A: We wanted to give a voice to the 21,300 Avianca employees who were still working for our travellers who are our priority and to demonstrate that the difficult situation encouraged us to work for them.

Q: Did social media staff receive any training on empathy and tone of voice?

A: Yes, our Social Media team received everything they needed to be able to put into practice the strategy on our channels; we discussed the concept, the tone and the importance we should give to our travellers, for instance, telling them that Avianca was working for them despite the situation.

Q: Which channels were used for the campaign? Was it only online?

A: We presented a 360-degree media investment but mostly focused on our communication on Social Media. We also let the media, opinion leaders, unions, influencers and our community know the real side of the requests by ACDAC.

Q: Did you notice if using social media helped to reduce the workload for the call centre? Did you use any form of automation or chatbots?

A: Yes, we took the opportunity to keep our community informed via Social Media. We invited users to leave their personal data through contact forms so we could have a direct and personalized contact with them about their flight changes. While we supported the FAQ traffic, our 24/7 keepers team (social media customer service team – ed.) was taking care of the situation.

Q: What was the key to success for the #YoNoParo campaign?

A: The successful component of this campaign on Social Media was immediacy: we gave our travellers correct and first-hand information about their flight statuses. The key was to reassure that we never stopped dealing with the illegal cessation and that we were doing everything to connect them with their destinations.

Q: What was your favourite part of the campaign?

A: My favourite part was when our travellers thanked Avianca’s employees using #YoNoParo on their social media, valuing the ones who didn’t stop and did everything to take them to their destinations.

Q: Was there a follow-up campaign to help the brand recover after the strike was over?

A: Yes, we worked on a campaign that was called GRACIAS. It was an emotional message for all our employees who didn’t “stop” and also for the travellers who were there supporting us despite the situation. This campaign also helped us restore their confidence and reactivate brand sales. By the end of November of 2017, Avianca’s occupancy was 88% with sales around 40 million dollars.

Q: It is a fantastic case study for crisis management. Has social media now gained more importance for C-level executives at Avianca?

A: Since then, Avianca’s communication has been more focused on Social and Digital Media. Executives see that these channels can offer a great opportunity to influence our travellers and users; and also give a practical, agile and closer way to inform and generate empathy with the community.