This month we’ve produced a special report all about flight shaming, the climate change movement and aviation.  It features 68 pages of original content, complete with recommendations on how airlines should respond.  You can view and download it here. This post is an article from the report.

Is Ryanair ‘the new coal’ or is it Europe’s greenest airline?  That depends on who you talk to. According to Ryanair, it offers – ‘lowest fares / lowest emissions.’  Ryanair actually turned this claim into an advertising campaign (see the image below). 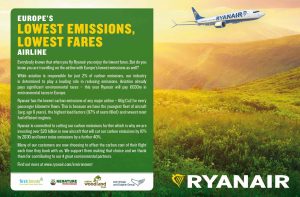 The ad talks about new aircraft, lower carbon emissions, and features a visual of a Ryanair 737 flying over a green meadow.  It appeared in Britain’s Sunday Times newspaper among others, and was accompanied by a short video highlighting the airline’s environmental credentials.

It also prompted complaints to the UK’s Advertising Standards Authority by pressure group Airport Watch, among others, who said, ‘the misrepresentation that Ryanair is attempting, maybe as just the boldest of the aviation industry attempts to push back against increasing public concerns about its climate change impacts.’

In a blog post, Airport Watch pointed out that Ryanair has form, having been criticised as far back as 2007 for what was seen as making misleading environmental claims.

However a lot of the media similarly didn’t buy it.  Earlier in the year, Ryanair was called ‘the new coal’ by Andrew Murphy, the aviation manager at the European Federation for Transport and Environment in the Guardian.  This came as the Irish LCC joined nine coal fired power plants in the list of the top ten carbon emitters in Europe.

Meanwhile Wired ran a piece with the title, ‘Sorry Ryanair, there’s no such thing as a green airline.’  The article quotes Christian Jardine, a research analyst at the University of Oxford’s Environmental Change Institute, in saying that Ryanair is not necessarily green as such, it simply packs more people into aircraft.

As Jardine says in the piece, “Ryanair’s sole business model is to grow passenger kilometres,” a by-product of that just happens to be that you reduce the average per passenger carbon emission.

On the other side of the Atlantic, Frontier came in for similar criticism on the back of its ‘Fly Greener’ initiative, complete with claims to be ‘America’s greenest airline.’

This included a flight to Greenville NC, and a promo where having the last name ‘Greene’ or ‘Green’ would give you the chance to win free flights.

In the Washington Post, Hannah Sampson called Frontier’s campaign a ‘green stunt.’  A number of activists and commentators in Hannah Sampson’s piece claim initiatives like this are worse than doing nothing, as they lull flyers into a false sense of security.

As a result, it’s problematic when an airline claims to be ‘green’.  As the Daily Telegraph piece says, it treats people like idiots.

There is enough awareness around aviation and climate change for flight shaming to already have had an impact on consumer behaviour.

An airline calling itself green doesn’t look credible, and it could actually do more harm than good in masking some of the more concrete steps being taken by airlines and by the industry in being more environmentally responsible.

The challenge is to communicate those steps in a way that is clear, meaningful and easy to understand.

And here we’ll finish off with something that Ryanair *is* doing right.  The title for this video, ‘Europe’s greenest airline’ raises a number of red flags for the reasons we’ve already mentioned.

However, much of the actual video content, which features the airline’s CMO, Kenny Jacobs is good, because it explains what Ryanair is doing in very easy to understand terms.  E.g.:

This is a good, simple explanation.  Don’t assume consumers know this stuff, spell it out.  Except when talking about ‘load factors’ Jacobs doesn’t reach for jargon, and he positions what Ryanair is doing in language that someone who isn’t an AV Geek can easily grasp.