You’ve got a crisis plan, but have you factored in your staff?

By Kate Hartley, Co-Founder, Polpeo, Author of the book, Communicate in a Crisis

This post is part of our special report into the aviation industry and flight shaming, which was produced in partnership with crisis simulation experts Polpeo.  You can download the full report here.

Many if not most of the issues and crisis management plans we see overlook one very important factor:  What about your staff? Have you thought about the impact on communications teams, or on frontline staff members when a crisis breaks?

That’s particularly relevant when it comes to environmental protests, as these direct themselves at travel and aviation brands in two ways.  You get online activism, where protestors post on your Facebook page, or organise hashtags on Twitter, which your social media team has to field.

And then you increasingly get direct action, where protestors actually show up at an airport or at a head office.

Here in London, that’s already happened.  In October, London City Airport faced disruption when protestors turned up and (among other things) climbed on an aircraft.  And Heathrow has faced several threats from activists planning to fly drones around the runways, something that would of course close the airport (so far they’ve been unsuccessful). 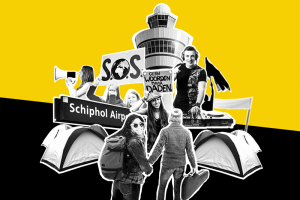 However for a much better, and I think more common, example of what aviation brands are likely to face, it’s worth looking at what Greenpeace has (at time of writing) got planned in Amsterdam.

The environmental group intends to show up for two days at Schiphol, but their aim is not to disrupt flights.  Instead, they intend to hold a ‘Prostestival’, involving music, banners, noise and a visible presence.

According to the NL Times, Greenpeace said, “By claiming a central location inside, Schiphol Group literally cannot ignore the action. The visitors to the festival are not planning to check out quickly.”

Polpeo’s offices are near London’s Oxford Circus, so this idea of ‘not checking out quickly’ is something I’ve seen first hand.

Extinction Rebellion activists have so far turned up twice this year, in the Spring and again in October.  They didn’t leave in a hurry either time, for example, in the Spring their protest involved setting up an encampment and stopping traffic.

Though Greenpeace has published a good conduct style ‘action agreement’ for Protestival participants, it’s worth noting that on the Extinction Rebellion sub-thread on Reddit, there were comments accusing Greenpeace of being too moderate.

As a result, not everyone in the wider movement shares Greenpeace’s commitment to good behaviour that avoids disruption.

So just imagine that a group turns up to where you are.  They don’t disrupt flights or stop your business from operating, and they do just enough to stop being immediately removed by Police.

But they form a kind of picket line, where they talk to staff as they go to work, or to passengers trying to check in.  And they stay for a day or two before they are finally moved on.

Then imagine that there’s social media and online activity running alongside this, where your team is having to field comments about your organisation ‘burning the planet’ or being a polluter.

What’s the effect on staff?  For many it will be emotionally draining to have to encounter activists several times a day.

Some may even get angry at them.

When Lufthansa boss Carsten Spohr recently accused flight shaming of being ‘fake news’, he actually hit on a sentiment that you can often see expressed by aviation industry workers or the AV Geek community online.

For example, the One Mile at a Time blog reported Spohr’s comments by concluding that “I do think the airline industry is disproportionately attacked when it comes to their emissions, because they’re an easy target. “

Meanwhile, Live & Let’s Fly actually congratulated Spohr for “a rare pushback in the politically correct world of corporate capitulation via lip service to the environmental movement.“

So some people in the industry feel unfairly targeted by the climate change movement.  And it wouldn’t be a stretch to imagine a situation where a few employees get in an argument with climate change activists, with the exchange being captured on social media.

Then looking ahead into the future, you could perhaps see a scenario where even working for a so-called ‘polluting’ airline puts you in line for criticism, much as the same way as if you were working for an oil company.

Seems far fetched?  Maybe, but remember that some of the more radical environmental groups are already calling for airline advertising to come with health warnings like tobacco ads do.

So how do you help your teams.  First of all, make sure all frontline staff are on board, and are aware of how to act.  Also, if you don’t already do this, have an internal social media policy in place, making sure that staff can’t use their personal accounts to comment on what the company is doing.

More widely you need to:

When a crisis does break, you need to be mindful of the mental and physical health of your teams, including:

All of these things form part of our crisis training and crisis simulations.  Get in touch with us to see how we can help.

SimpliFlying is the leading consulting firm that specialises in aviation marketing and innovation. We are one of the largest in the world, having worked with over 100 aviation brands globally. Our growing list of clients includes American Airlines, Cebu Pacific, Turkish Airlines, LATAM Airlines, Airbus, Boeing, Bombardier and Toronto Pearson Airport. Headquartered in Singapore, we have presences in Canada, Europe and the Far East. Our business includes a consultancy arm, training academy marketers, events and conferences, as well as a content creation division, which among other things produces the world’s only aviation marketing magazine. If you're keen to tap our expertise, email us at contact@simpliflying.com

Latest posts by SimpliFlying (see all)