It’s clear that sustainability has become an increasingly important part of an airline’s brand proposition. Many – including Qatar Airways, Turkish Airlines and Austrian, among others – used World Environment Day on 4th June to communicate the steps they’re taking to protect the environment, from improving fuel efficiency to providing passengers with natural, sustainable amenities. And according to a recent article from The Independent, half of the world’s airlines have now made a commitment to reaching net-zero carbon emissions.

Both Douglas and Kirby feel that their tenures will be judged by the strides they make towards lowering emissions at their respective airlines. Douglas argued, “We know the COVID pandemic will end, we just don’t know when. The one thing that won’t ever end in aviation is the growing need to get more sustainable, and that will be the primary differentiator going forward.”

To this end, Etihad pushed on with its sustainability agenda throughout 2020, launching its second environment-focused flying testbed after the Greenliner in 2019: A 787-9 aircraft that took part in Boeing’s ecoDemonstrator programme to research and test technologies that reduce fuel use, emissions and noise, and incorporate more sustainable materials. “The pandemic will be history at some stage, but this will actually shape history for aviation,” reiterated Douglas. A close-up of the tail fin of the Boeing 787-9 aircraft featuring Etihad’s Greenliner aircraft livery.

Kirby’s vision when it comes to sustainability is similarly lofty. “This isn’t just about United. We have a brand and a profile that can help change the conversation [about climate change] … I hope that’s the biggest legacy that I leave behind when I retire.”

United has sparked numerous conversations about the future of flying since the beginning of this year. In February, the airline announced a billion-dollar deal with Archer Aviation for up to 200 of its Maker electric vertical take-off and landing (eVTOL) aircraft. As part of the deal, United said it would help Archer with the development of the battery-powered, short-haul aircraft, which are expected to enter commercial service as soon as 2024. Then, this month, it revealed it has placed an order for three Overture jets from Boom Supersonic. In both cases, United is the companies’ first customer.

It’s no secret that sustainability is at the top of Kirby’s agenda. On becoming Chairman of the APEX/IFSA Board of Governors, following a meeting that decided sustainability should be one of the associations’ two top priorities for the rest of the year, he said, “Sustainability is the biggest challenge facing our generation, and it’s up to us to leave a better world behind for our children and our grandchildren. I will be focused on using this platform as an opportunity to try and push all of us to do the best we can.”

Both CEOs are aware of the importance of partnerships in creating meaningful change. Douglas was keen to highlight some of these, both big and small: Apart from working on hydrogen fuels and e-fuels with the Abu Dhabi National Oil Company, he is proud that Etihad works with “SMEs from all around the world.” One such enterprise helping the carrier strip weight from its aircraft is Abu Dhabi-Based Startup The Concept, which is developing meal trays made from sustainable materials that are embedded with an IoT chip to track food consumption on board. By seeing what part of the meals aren’t consumed, the company is hoping to help reduce food waste. He sees the potential to make the challenge around sustainability “a lot more fun within the broader aviation community.”

In his interview, Kirby took a less light-hearted approach. He said that United will reach its commitment to becoming 100% green – i.e. reducing greenhouse gas emissions 100% by 2050% – through two main areas. “One is sustainable aviation fuel … it’s going to require a lot of investment, a lot of R&D and a lot of support to grow to a level that’s significant,” he said. “The other is carbon sequestration.” This is the process of capturing and storing atmospheric carbon dioxide.

But the topic that really brings airlines’ differing views to the fore is carbon offsets, which compensate for carriers’ carbon emissions by investing in environmental projects. Etihad obviously sees the value in offsetting its emissions, with Douglas saying that its Greenliner will be carbon neutral this year thanks to the airline’s contribution to “a forestry programme in Tanzania.” In January, Etihad even boosted its self-funded carbon offset program with Shell to include projects in Peru’s Cordillera Azul National Park and Indonesia’s Katingan Mentaya Project.

Like many other airlines, including Lufthansa and Air New Zealand, Etihad is also working with a third party company – while there are many, Etihad has chosen to partner with CarbonClick – to provide passengers with the option to pay a little extra to offset their flights.

Kirby, on the other hand, believes carbon offsets are “greenwashing,” a way of “avoiding the problem.” He explained, “The reason offsets can’t work is that we emit 4,000 times as much carbon as we did in the pre-industrial era. Offsets are basically planting trees, and we cannot plant 4,000 times as many trees, there’s simply not enough room on the planet.” 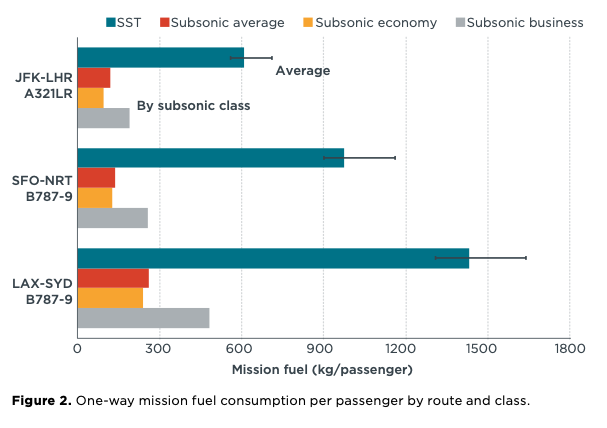 Despite Kirby’s certainty on the correct way forward, there’s no silver bullet when it comes to flying green, as United’s plans to operate supersonic aircraft have also received criticism from the likes of Dan Rutherford, Shipping and Aviation Director at the International Council for Clean Transportation (ICCT). In 2019, the ICCT conducted a study which showed that supersonic planes could emit around seven times more emissions per passenger than subsonic aircraft.

While the topic of sustainability remains a tricky one for airlines, one thing they can all agree on is that there’s no miracle antidote. That said, it’s great to see carriers like United and Etihad investing in and giving voice to their sustainability efforts to keep it front and centre of the industry’s mind.