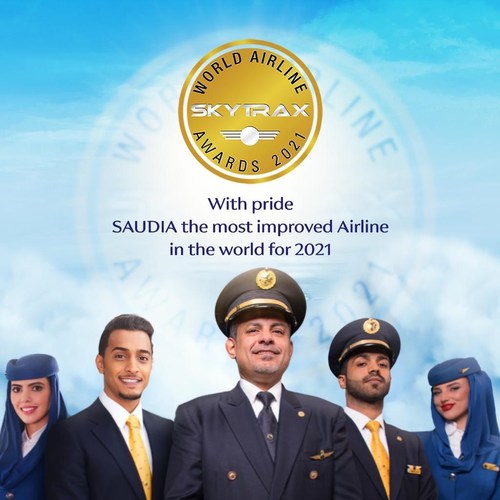 How does an airline go from being ranked 82nd in the world, to 51st and then to 26th in a span of four years? How does it maintain an upward trajectory despite the setback from the pandemic? How does the CEO keep its staff motivated?

While there is glory in retaining a top position, there is much to learn from the most improved. Saudia has received the 2021 SkyTrax award for the World’s Most Improved Airline, marking its second win in the category following a previous triumph in 2017.

This latest accolade is one of a few that Saudia has received throughout the COVID-19 pandemic – the carrier also received a Diamond-level certification as part of the APEX Health Safety powered by SimpliFlying program in January this year and has been recognized as a “Five Star Global Airline” for 2021 by APEX.

We decided to reach out to the airline’s leadership to learn more about how this transformation was achieved.

For Capt. Ibrahim S. Koshy, the fact that the airline has clocked up a host of different achievements is important. During an interview with SimpliFlying’s CEO, Shashank Nigam, he explained,

“We’ve even had a vote of confidence from the financial sector, with six banks putting together the largest financing deal [in the history of Saudia Arabia’s aviation industry] so we can expand our fleet,” he continued.

Capt. Koshy believes that this ongoing recognition is motivational for Saudia’s employees, because “it shows them that [the airline] is on the right track.” But he’s also convinced that his staff, from cabin crew to airport workers, are keeping themselves inspired to do “everything right for every guest” by “sharing some of the small stories about receiving recognition for making someone’s journey much more memorable and pleasant.”

Saudia is on an upward trajectory

While there’s no doubt the carrier is excelling at present, Capt. Koshy is keen for Saudia not to rest on its laurels. He views the second SkyTrax win as an acknowledgement of its “upward trajectory,” something which began five years ago before its 2017 win and is still in progress today.

For example, Saudia is currently focused on becoming one of the top global players in the airline industry under its internal transformation program, which aims to improve the customer experience across every touchpoint along the passenger journey, whether physical or digital. The goal is to embrace and celebrate its “naturally generous” Saudi hospitality.

To this end, Saudia is introducing new service elements on the ground and in the air. One such improvement is the introduction of a Saudia ambassador, who will greet first- and business-class passengers and escort them to the airline’s lounges at King Abdulaziz International Airport in Jeddah and King Khalid International Airport in Riyadh, as well as provide information on available upgrade and flight times. Onboard, simple measures like Lifebuoy-powered hygiene kits for all and warm towel service for Economy Class passengers elevates the customer experience.

While COVID-19 may have temporarily changed the airline’s priorities, Capt. Koshy acknowledges that aiming to be an industry leader in its approach to customer confidence, comfort and safety actually accelerated its transformation. The airline has been agile in introducing confidence-boosting health safety measures like enhanced sanitisation of airplanes and even a partnership with Dettol and then Lifebuoy.

The timing of Saudia’s conscious efforts is also very much part of a larger commitment to the Kingdom of Saudia Arabia’s Vision 2030, which envisions the country becoming not just a religious, but a cultural tourist destination known for a variety of events. “We believe Saudia is the wings of Vision 2030,” Capt. Koshy said.

Like many other airlines, Saudia is also heavily focused on sustainability moving forward. Not only is it planning to have one of the world’s youngest aircraft fleets under the aforementioned financing deal – consisting of 20 A321neos, 15 A321XLRs and eight Boeing 787-10s (30 A320neos will also go to its low-cost subsidiary flyadeal, which recently celebrated its fourth anniversary) – it is working on a variety of projects covering recycling, low carbon and sustainable aviation fuels, and more.

If it remains on this upward trajectory, it may be just a matter of time before Saudia is recognized as one of the world’s best airlines. That will be a testament to the efforts of the entire transformation team at the airline that has not rested on its laurels in the past five years and continues going strong despite COVID.

Saudia’s crowning as the world’s most improved airline a second time in four years shows that it takes consistent effort and relentless focus (in good times and bad) to continue on an upward trajectory. There’s much to learn from the most improved, isn’t it?