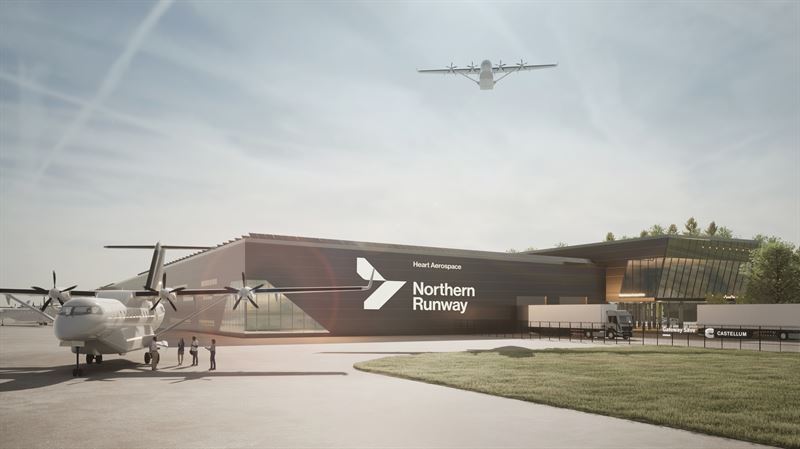 Yesterday there were two announcements in the next generation aircraft space, one from Heart Aerospace and another from Eviation. Together they tell us a lot about where the sector is heading.

Heart’s announcement was the bigger of the two.

That’s because it involved equity deals with Air Canada and Saab, firm orders from Air Canada, and the announcement of a new facility to produce Heart’s aircraft in Gothenburg called Northern Runway.

Overall, the optics of the announcement were excellent.  On display were votes of confidence from major aviation companies, United remains the major customer and Scott Kirby appeared on video to talk about how the airline intends to be unique in reaching net zero without recourse to carbon offsets.

Those votes of confidence are a good indication of Heart Aerospace’s aircraft actually making it from the airframe sitting in the hangar right now to commercial flight in 2028. 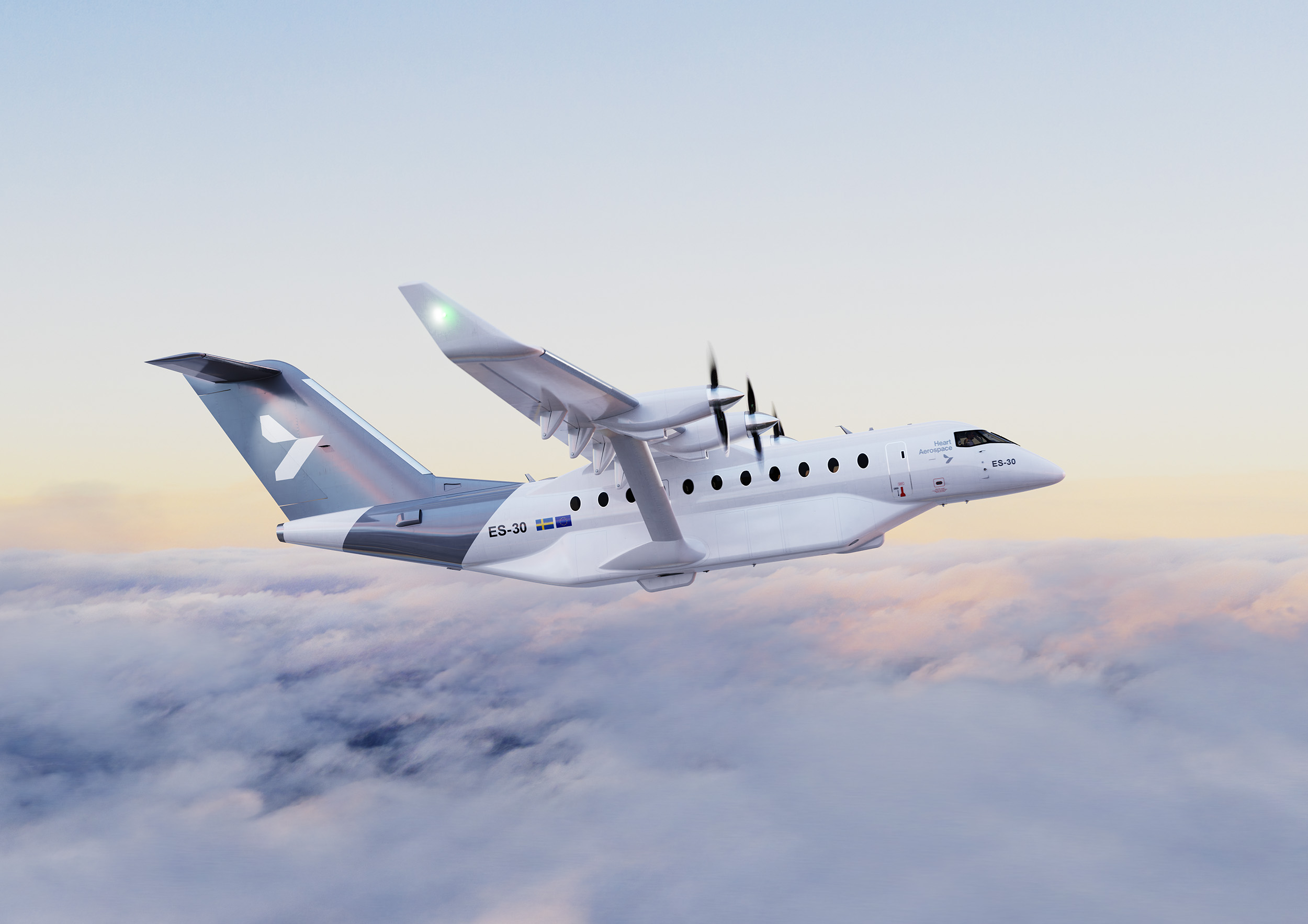 In addition to the two new equity partners, most of the attention has focused on Heart shelving the 19 seater ES-19, and moving instead to producing the 30 seater ES-30.

That’s done so that the specifications match what airlines expect from a regional turboprop.  For example, passengers will be able to take an industry standard 25kg of luggage and there are options for a galley and WC in front.  Right now there are a lot of aircraft like the Saab 340 still in service in the c.30 seat range. The ES-30 will work as a lower operating cost, lower noise and lower carbon replacement.

However, in doing so, Heart is going down a different technology route than before.

Rather than battery-electric, the ES-30 will be hybrid-electric.  CEO Anders Forslund called it ‘reserve hybrid’ as the aircraft will have turbine engines which can be a reserve, or to increase the range.

The latter point is obviously key, many airlines will want a 30 seater that can fly 400km (with the turbine engines) as opposed to 200km, and so you can envisage them being used.

Like other hybrid electric manufacturers, Heart assumes that the turbine part will be powered by Sustainable Aviation Fuel (SAF).  That of course remains to be seen, as that’s down to the individual airlines, which may want the cost saving of regular fuel and the benefit of still having lower emissions via the battery.

So, if airlines do go down that route, then the ES-30 will in some cases be a low emissions, and not a no emissions solution. 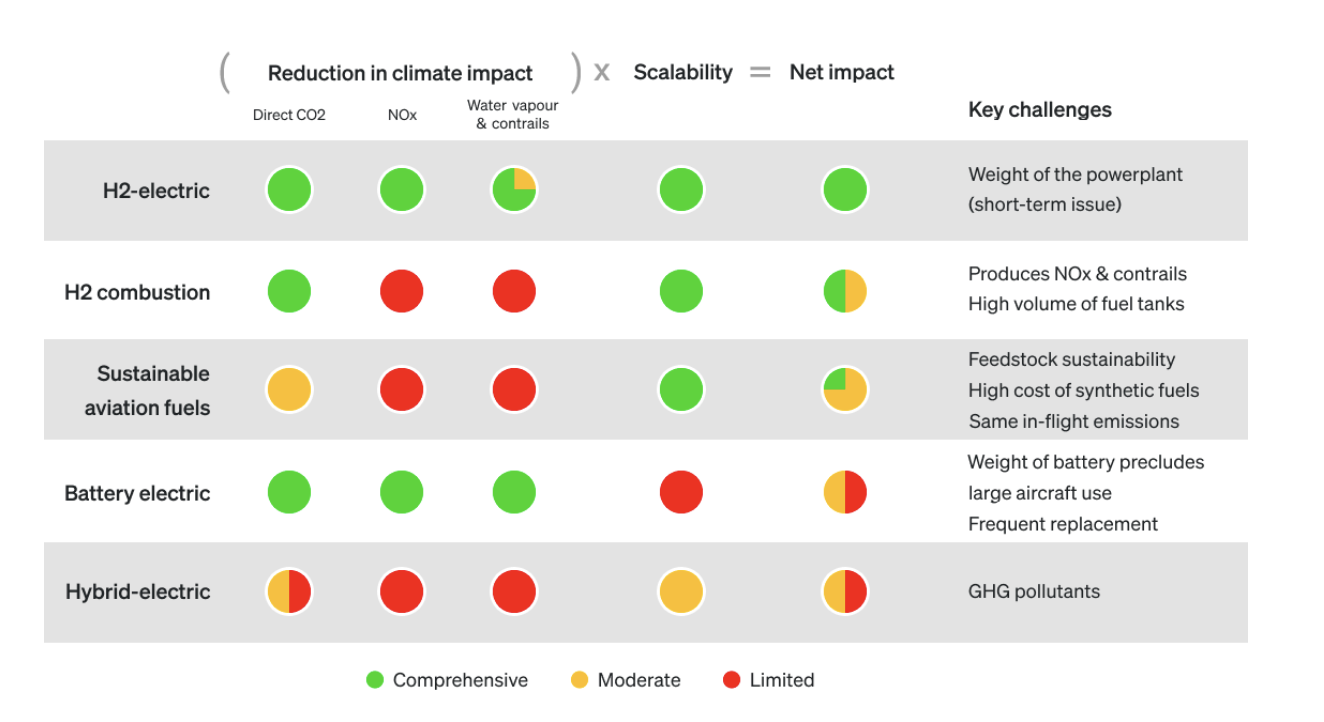 Val Miftakhov from ZeroAvia uses the following chart in his presentations and on the ZeroAvia website.

Clearly the chart is geared towards pushing his favoured technology – hydrogen-electric.  For example, it misses a column about the infrastructure needed, which is a bigger challenge for hydrogen.

Nevertheless, it does give an indication of some of the problems of the hybrid electric route if normal fuel is used.

Yesterday also saw an announcement by Eviation, that it had signed a deal for 50 “Alice” commuter aircraft with Miami based Global Crossing, for use in Florida and the Caribbean.

Other pre-orders for the Eviation Alice includes one from Massachusetts based Cape Air, which flies small regional and commuter routes.

Eviation will be using a magniX electric powertrain (the two companies share the same major shareholder, Singapore based Clermont).  Earlier this year co-founder Omer Bar-Yohay, told  Rolling Stone how the “Alice” will manage to run on battery power.

Alice has a very distinctive sleek design, and according to Bar-Yohay, it’s this design and the weight that he concentrated on to make a battery-electric solution possible.

However, the Alice is significantly smaller than the ES-30, or even Heart’s previous aircraft, the ES-19.  It has three versions, a cargo version (DHL has pre-orders), an executive version, and a commuter version – with nine seats.

Earlier this Summer, Eviation said that the first test flight for the Alice would be happening this Summer.  Unless that’s taking place over the next few days, the assumption is that this target will be missed.

Even so, Eviation has moved the project to Moses Lake, Washington, in preparation for test flights, so it’s also still reasonable to assume that this will happen soon.

Together these two announcements tell us where the market is heading.

Battery electric is a viable solution, but for now it will be for sub-regional routes.  You can also see it being used by private aviation on demand companies.

For anything larger, the way forward for now appears to be hybrid-electric.  Or hydrogen-electric like ZeroAvia is planning (or Airbus is looking into hydrogen-combustion).

Finally, Anders Forslund talked about the next model being a 50 seater, so in the next decade his aircraft will, assuming the battery technology advances enough, be able to serve routes that right now are served by the likes of the Embraer-145 or the smaller ATR aircraft.

We have a next generation aircraft power-list coming out at the end of September, in which both Heart Aerospace and Eviation will be featured.  If you want to receive it, be sure to sign up to our mailing list.