The “Jetstar-isation” of Qantas is not over yet. Is the LCC taking over the legacy parent brand?

Last week, I wrote an article for CNBC, which talked about the agility of Qantas that keeps the airline in profitable territory. The article resulted in a lively debate with a number of Aussie aviation experts down under, and one of them kindly offered to write a detailed Guest Post on SimpliFlying on how it’s actually Jetstar that’s keeping Qantas afloat.

Grant McHerron (aka Falcon124) is an opinionated aviation enthusiast & co-host of Plane Crazy Down Under, Australia’s only aviation podcast. He is an online/digital project manager and perpetual student pilot who can often be found crewing hot air balloons, working airside at Avalon Airshow and plane spotting at airports around the world. He graciousouly hosted me when I visited Melbourne last year, and we almost watched the sunrise in his hot-air balloon 🙂 Enjoy!

The latest half-yearly results from QANTAS continue to show an airline that is hemorrhaging cash on its mainline, full service routes. While QANTAS are certainly showing signs of agility, the primary factor keeping the group afloat is the success of their Low Cost Carrier brand Jetstar.

The creation of Jetstar

Towards the end of the 1990’s, QANTAS saw the writing on the wall as customers moved towards the Low Cost Carrier (LCC) model, sacrificing as much as possible to chase cheaper airfares (yet still complaining strenuously about lack of service despite paying next to nothing, but that’s a whole different article 🙂 Like other airlines they decided to create their own LCC, launching Jetstar in 2004 by rebranding the Impulse Airlines LCC operation that QANTAS had previously purchased in 2001. Re-branding Impulse Airlines was important as it allowed QANTAS to utilise their equipment and, most importantly, their staff agreements.

These agreements have allowed Jetstar to pay their crew less and utilise them more than QANTAS mainline staff who are covered by agreements that are the result of decades of union strength and bargaining. This low cost base provides Jetstar with more room to reduce fares and compete against other LCCs. 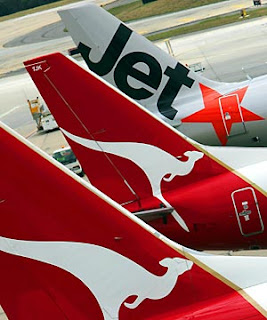 Jetstar complementing and competing with Qantas

Low fares have not been the only factor that has allowed QANTAS’ baby to survive & grow, unlike other LCC offshoots, such as MetroJet & Song. Competing with Virgin Blue and Tiger Airways, Jetstar are also taking over unprofitable routes from the QANTAS mainline brand, including the routes run by Australian Airlines, the low cost international operation that QANTAS had launched in 2002 but eventually folded in favour of Jetstar.

In response to Tiger Airways starting a Melbourne to Sydney service in 2009, QANTAS allowed Jetstar onto the route in direct competition with their own “City Flyer” high-frequency services. The route between Melbourne & Sydney is the world’s third busiest and features high numbers of corporate travellers commuting between the cities. QANTAS reasoned that with fares falling further thanks to Tiger’s arrival, they might as well try to capture the discount travellers and keep them “in house” rather than lose them entirely.

It was this introduction of Jetstar onto one of QANTAS’ domestic cash cow routes that spurred Alan Joyce to famously state there would be “no further Jetstarisation of QANTAS.” If only that were true.

Jetstar’s growth has survived challenges such as the Bird Flu epidemic, Swine Flu and now the global financial meltdown. In fact, the current crises appears to have helped drive more traffic to Jetstar as business travellers and other frequent flyers have had to face reality and reduce the size of their travel budgets.

QANTAS recognised the surging “flight to value” as their First Class cabins drained down into Business Class while business travelers wound up back into Economy Class. Many passengers were lost to other airlines on some routes in the mid 2000’s, apparently fuelled by QANTAS’ lack of any Premium Economy offerings. Many of us in Australia were wondering why QANTAS was slow to realise that frequent travelers often want space & comfort, something certainly not encountered in the cramped conditions of cattle class.

QANTAS did eventually introduce a premium economy service in April 2008, slowly expanding to most of their international routes by the end of 2008. While this helped retain customers, it was becoming clear that high-end premium traffic was not only down but may, in fact, never come back to QANTAS. With high end premium traffic down and growing competition from the top quality First Class offerings at Emirates and Singapore Airlines, QANTAS have taken the wise step and are removing first class from their remaining 747-400s and 8 of their A380s (those arriving in 2012 & beyond). They will still have a First Class offering on 12 of their A380s but are reducing the number of Business Class seats on those aircraft to provide space of more Premium Economy and Economy seats.

This is yet another step along the Jetstarisation of QANTAS, even though the aircraft are still under the mainline QANTAS brand. Additional steps towards Jetstar’s dominance include their current push into Asia and their intended use of 787s to open up Europe. It is perhaps no surprise that all the new jet services & routes that QANTAS is adding (or re-opening) appear to be under the Jetstar brand, not QANTAS itself.

Qantas for Business, Jetstar for everyone else?

Over at the Plane Crazy Down Under podcast, this ongoing movement towards Jetstar has us making reference to “QANTAS, a member of the Jetstar group.” We have also joked that the ultimate end point for Jetstar will be flying JQ branded high density A380s across the Pacific and into Europe. As Ben Sandilands has pointed out in a recent Plane Talking entry, this may very well become a reality if the 787-9 does not live up to original expectations.

If current trends in domestic & international airline passenger transport continue, it is clear that Jetstar will continue to gain market share as QANTAS reduce their mainline aircraft to only those routes that still have a good market for business class. It seems likely that Alan Joyce will eventually regret his comment that the Jetstarisation has ceased as it appears to be, if anything, speeding up.