Yesterday, airline marketing and customer service changed — arguably irreversibly — after a man spent a whopping $1000 on buying a Promoted Tweet to seek British Airways’ (and the world’s) attention, when they lost his dad’s bag. [push h=”14″]

Airlines losing bags is not a new phenomenon. Neither is customers venting their frustration online. What’s new is the extent to which an angry customer went to seek the airline’s attention. This appears to be a tipping point, and there are three things that have now changed about airline marketing forever. [push h=”14″]

The most glaring mistake from British Airways was not that they lost a bag, but rather that they took seven hours to reply to a tweet! [push h=”14″]

As far back as 2011, 81.8% of all tweets from passengers to airlines were regarding customer service issues. And the trend has only grown since then. So why is it that most airlines that are on Twitter, offer customer service only within limited daylight hours in certain timezones, when they are running a 24/7 business? [push h=”14″]

The Connected Traveller of today demands real-time service. Those airlines that refuse to offer 24/7 service through Twitter should consider quitting the platform for good. Yes, it’s going to take resources, so go ahead and plan for it.

Most US-based airlines, like American and Delta are doing a splendid job with Twitter customer service. Others like KLM, SAS Scandinavian and Air New Zealand are great too. Some, like Emirates, that have over a million fans on Facebook, have made a conscious decision not to be on Twitter, perhaps due to the resources required in providing customer service. If you’re on Twitter, be prepared to be there for customers, 24/7. [push h=”14″] 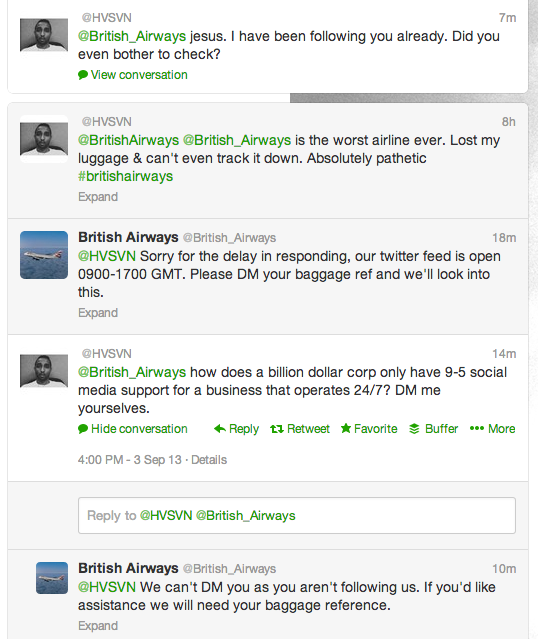 2. Your brand is not what you say it is, it’s what they say it is

“…Because they’re not a slogan. They’re a promise. We’re committing to this promise again and we’ll continue to build on it.”

Unfortunately, marketing today is no longer a one-way street. It’s a two-way conversations. Airlines may hire the best agencies to come up with the most creative campaigns, which often work too. But today, as my friend, Timothy likes to say, “your airline’s reputation is only as good as the last time you served up your last bag…. correctly.” [push h=”14″]

When the airline falters, and isn’t agile enough to respond soon enough, all control of the brand goes in the hands of the passengers. As it happened in this case — where Mr Hasan, through his promoted tweet, let over 75,000 people know that British Airways doesn’t have good customer service. [push h=”14″]

3. Don’t underestimate the power of the common man. He will spend for a cause.

Mr Hasan revealed on Twitter that he spent $1000 on his promoted tweet. He must either have been very angry with BA, or the lost bag must have had something very valuable in it. But it shows that if the passenger wants to, he can move mountains to seek attention regarding his cause. And he managed to get over 76,000 impressions on Twitter alone, excluding all the coverage on mainstream outlets such as the BBC and CNN. [push h=”14″]

According to Fast Company,

“Promoted tweets are usually used by brands to promote content to a wider audience. The tweets appear at the top of users’ Twitter feeds. That an individual can utilize the platform to slam a brand raises the question of what exactly the parameters are for promoted tweets. But, in some ways, this actually strengthens the idea of the platform: If you can afford it, promoted tweets are one way customers might be able to quickly get a brand’s attention.”

And this is the crux of the story. The common man, or brand detractors, now have the same tools as the big brands, and will not shy away from using them, sometimes even better than the brands themselves. [push h=”14″]

Airline marketing changed forever, yet again, yesterday. And it’s time for the industry to wake up and smell the coffee.