Living Walls: At the Intersection of Green Technology and Good Design Did you know that the first iteration of a living wall was patented by landscape architect Stanley Hart White in 1937? Although his idea of “botanical bricks” that could be built to any height seemed to fade into obscurity for the next 50 years, it was brought back to life by French botanist Patrick Blanc, who created a green wall with a full hydroponics system at the Cité des Sciences et de l’Industrie in Paris in 1986.

After another lapse in popularity until around a decade ago, living walls are now broadly accepted to have a positive effect on people’s mental health, reducing stress. In practical terms, they improve airflow and filtration and absorb noise. All these benefits make green walls an attractive proposition for airports, which can be perceived as quite clinical and emissions-intensive spaces.

Edmonton International Airport (EIA) had a reason other than aesthetics for the installation of its 1,420-square-foot green wall, which consisted of 8,000 individual plants. EIA used nine of the 10 best plants for purifying the air based on findings from NASA that plants were more effective at removing toxins from indoor spaces than mechanical air filters. It was one of the first airport terminal projects targeting LEED certification, which is defined as a “symbol of sustainability achievement and leadership.” 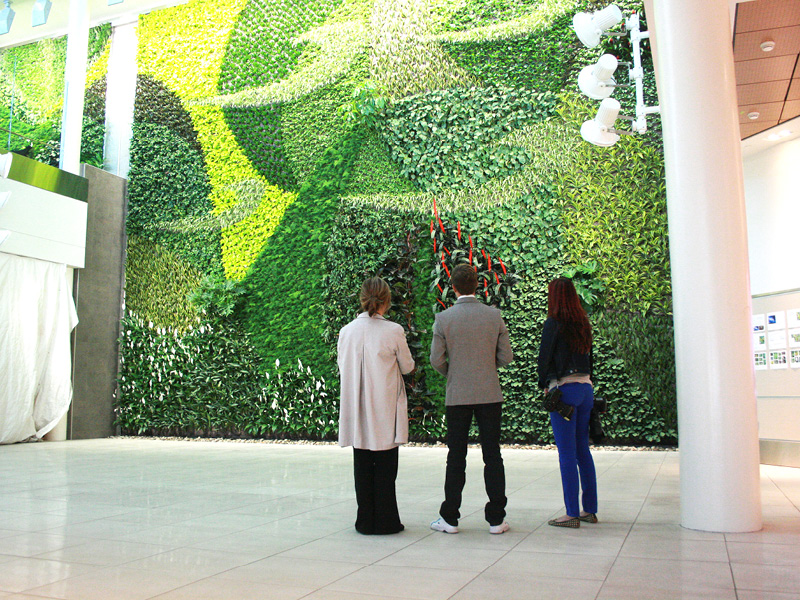 While living walls do absorb toxic air pollutants such as carbon dioxide, benzene, and volatile organic compounds as well as releasing oxygen into the air, the sustainability credentials of these displays do raise some challenges. Their ongoing maintenance can result in a large draw on water and energy consumption, and they typically have to be replaced after four years.

So, does this mean that as airports become more eco-conscious, they could phase out their living walls? Not necessarily. Airports are uniquely positioned to build on the concept and make them more efficient. The two things needed by green walls are large vertical spaces and access to natural light, both of which are plentiful in airports with their lofty ceilings and generous windows. And airports have a lot to gain their presence: green walls directly qualify for two LEED credits and can help to gain 30 more (a minimum of 40 is needed to gain a LEED certification).

A next-generation version of the living wall could look something like the “living curtain” made of bioplastic created by EcoLogicStudio in 2017 which, when deployed across two stories of a building, can absorb approximately one kilogram of CO2 per day. That’s the equivalent to 20 large trees.

The curtain, known as Photo.Synthetica, works when unfiltered air enters at the bottom of a bioplastic sheet and the algae that is pocketed within it turns CO2 and other pollutants into a by-product essential to the production of bioplastic. At the end of the process, fresh oxygen is released from the top of the sheet. If utilized on a large enough scale, living curtains like these could become a core component of an airport’s carbon offset programs. The initial images of the Photo.Synthetica curtains don’t make them look particularly aesthetically pleasing, but to see broader uptake, green technologies will need to integrate some important principles of design, like those set out by Dieter Rams in 1976. His principles include being innovative, aesthetic, understandable and long-lasting. This will certainly need to be the case before airports begin installing living curtains in customer-facing locations. The good news is that while they need to be replaced each year, it’s quick and easy to do so and would allow airports to incorporate new designs and trends.

Technological advancements are ever-changing as the world continues to try to tackle climate change. No one method of carbon sequestration is a silver bullet, so while new innovations based on living walls may seem like a small step, any step in the right direction is welcome.

SimpliFlying recently highlighted bio-curtains as a technology that could become a common feature in airport lounges by 2026 in its latest infographic and report on “The Rise of Green Travel.” Download the full report here.