US gives go ahead for vaccinated travel, UK may soon follow On Friday, The CDC reacted to the “real world” effectiveness of vaccines so far, by revising its guidelines on travel.

Lonely Planet has produced a guide on what countries vaccinated Americans can now travel to without major restrictions.

Tourist authorities would now do well to actively try and attract American travellers, who continue to have an appetite for travel.

For example, in the first two months of the year, Cancun recorded 2.4 million tourists, 1.3 million which were international and largely from the USA.

Delta has already announced an increase in its Iceland services on the basis of it being, “the first destination in Europe to permit entry to fully vaccinated Americans”. Meanwhile, the UK is considering a so-called traffic light system.

This will initially restrict travel to a number of ‘green’ countries which have high vaccination rates and decreasing community transmission.

Former Virgin Atlantic Comms Director, and now head of The PC Agency, Paul Charles has produced regular estimates on what those green countries are likely to be (see image).

Paul’s predictions (which he says are likely to change over April), place the USA, the UAE, Malta, Portugal and Mexico as green countries, Spain and Jamaica as amber, but a number of European countries such as France (which has just gone into lockdown again) and Germany as red.

In addition, the Daily Telegraph newspaper reports that like in the USA, vaccinated travellers from green countries will need a test before their return to the UK, but could skip one when they are back.

However, unvaccinated travellers will probably need a second test on returning home.

1 – Testing is here to stay, but it’s likely there will be lighter touch for passengers who have been vaccinated.

2 – Vaccine passports for travel are inevitable. UK Prime Minister Boris Johnson has said they will “definitely” be in use when travel resumes.

3 – An opportunity exists to build traffic and entice travellers on the slowly growing network of green routes.

This includes an opportunity for destinations that may in the past not have been obvious places for North American and European tourists.

4 – The US and (more cautiously) the UK are setting the overall direction.  Assuming this new regime doesn’t result in an import of cases, expect other countries to follow. 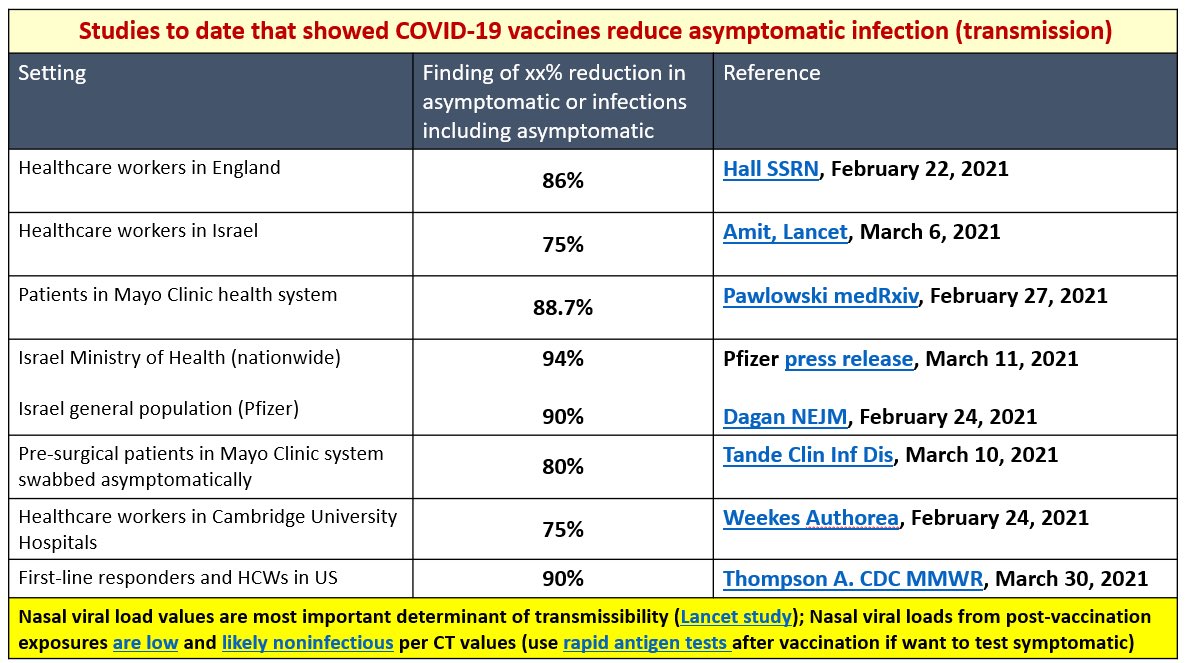 Building on that last point, The CDC has also rowed back slightly on previous comments by CDC Director Dr. Rochelle Walensky that the vaccines in circulation definitely stop transmission.

When it comes to travel, this is of course a crucial point – does opening your borders mean you are letting the virus in via vaccinated travellers who while not getting sick, could still infect others?

This prompted an exchange on Twitter, which is worth reading as it summarises much of the debate on this issue.

This took place between New York Times reporter Apoorva Mandavilli, who pens much of the newspaper’s COVID coverage, and a molecular biologist who goes by the Twitter name ‘Mac n’ Chise.’

“Mac” directed Apoorva Mandavilli towards a table produced by Dr Monica Gandhi from the University of California San Francisco (see image above), which based on results from the UK and Israel, estimates a reduction of 80-90% in asymptomatic infections (transmission).

The point was also made that no vaccine is 100% effective, and that there is a difference between a “carrier and a transmitter.”

“Vaccinated individuals can get infected and carry the virus. What is important to know is the viral load is so low you can’t transmit it.”

As we’ve talked about in our white paper and blog posts, one of the main public opinion battles the industry faces is with the Zero Covid movement, which takes a position that borders need to be sealed shut until the threat of Covid has passed.

The ‘not 100% effective’ argument is one that they use, along with talking about the variants, as well as the need to get children along with adults vaccinated.

As Irish Deputy Prime Minister Leo Varadkar has pointed out, the logical conclusion of what the Zero Covidians propose, is that border closures end up being more or less indefinite.

However, from the travel industry’s point of view, it’s important that we support responsible, staged openings, supported by the evidence, and an 80-90% reduction in asymptomatic infections is probably as good as it is going to get.

As a result, the steps taken by the CDC to give a cautious green light to travel is one that should be welcomed.