Yet another Air New Zealand safety video has gone viral, clocking almost 700,000 views on Youtube on the day of release! The airline has made a habit of releasing videos that instantly hit the groove and are watched by millions. Previously, we’ve featured an interview with the airline’s CEO, Rob Fyfe talking about Rico – their furry mascot, who featured in their viral safety videos. Earlier last year, we also felicitated the lady behind their original safety videos, Megan Matthews, as a SimpliFlying Hero.

The latest safety video, entitled “An Unexpected Briefing” is inspired from the latest movie, The Hobbit: An Unexpected Journey. It features lots of creatures from J.R.R Tolkien’s Lord of the Rings legendarium. The flight attendant doing the safety demo has decidedly pointy ears and passengers have (very) hairy feet! It even features Gollum, a creature from the universe.

Air New Zealand also bills itself as the “Official Airline of The Middle Earth” and is running a contest for viewers of the video (in-flight, and on Youtube) to win tickets to New Zealand if they spot certain codes and people! 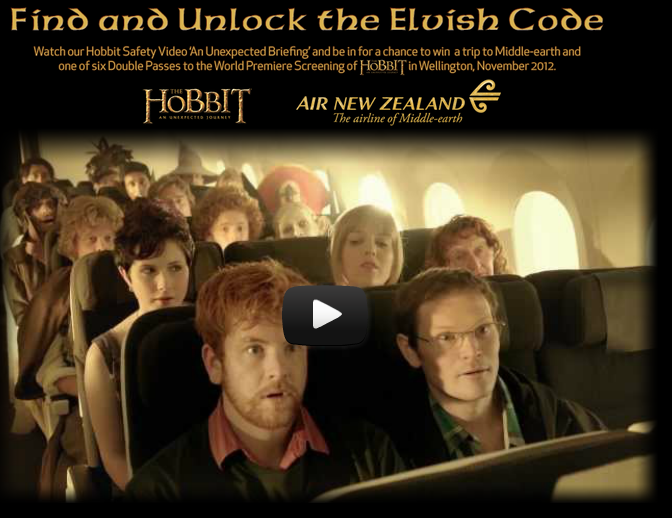 The Airline that made safety videos fun!

Airline safety videos in most airlines tend to be boring, run of the mill repetitions. But Air New Zealand has taken the same videos and turned them from what people ignored in-flight to something people watch at home on Youtube. Many times over! The airline has probably done more for in-flight safety than any other in the world through its innovative marketing strategies.

Here’s the story of how the latest video went viral.