On June 12, 2014, as I entered the Emirates Lounge at New York’s JFK Terminal 4, I saw a familiar scene — the lounge decked up in a conference setting, canapés being served to guests, who were mostly senior aviation and financial journalists. The destination on my boarding pass read, “Headquarters”. That’s because everyone was to go on a ride on the Emirates A380, to experience its comforts, after a slew of presentations by senior Airbus executives. I had been invited as a guest speaker by Airbus, to share my thoughts on the importance of passenger experience in the age of the connected traveller. It was an uncanny feeling.

Almost exactly six years earlier, on August 1, 2008, I was in the same lounge, witnessing Emirates’ first A380 flight. At that time, I was still working full-time in Boston at Endeca. SimpliFlying.com was a fledgling blog, and I had somehow managed to get a pass to the press event by Emirates. I had taken a Boltbus down from Boston just that morning, had a gyro for lunch at Penn Station, and taken the Metro to JFK. Once in the Emirates lounge, I was like a kid in a toy store — bedazzled by the sights and sounds of aviation. It was the first time ever that I was at an industry event.

During the press conference, I was the first one to ask a question of Tim Clark, the CEO of Emirates, after he finished his address. When I mentioned I’m with SimpliFlying, I received strange looks from most of the people in the lounge, as few had heard of the website. It was ironic that six years on, I was at the same location, with the same people. And this time, I was the one speaking from the stage. Life had come full circle.

It wasn’t easy. To leave a stable job in Boston. To jump ship at the peak of a recession. To leave the US and head back to Singapore. To move back in with my parents to save on rent. To become an entrepreneur. And that too in aviation. But it’s been a tremendous journey, and it’s been totally worth it. From my first conference in Abu Dhabi in March 2009, till the latest one I spoke at, the IATA Commercial Strategy in San Diego last year. From our first client, Winair, to some of our long running supporters, like LATAM Airlines and Boeing. From starting out with myself and an intern, to a full-time team spread around the world. 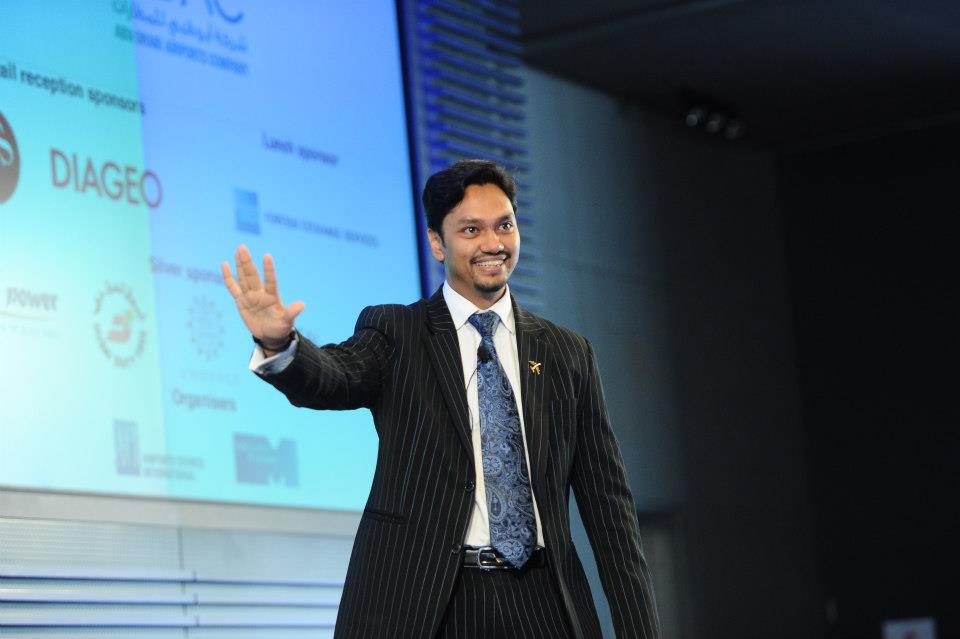 Speaking at the Trinity Forum

SimpliFlying started its journey in early 2009 by re-imagining the way airline branding worked, when we introduced the 6X airline branding model. We focused on digital marketing and gradually the blog became one of the most respected resources for cutting-edge airline marketing strategies. SimpliFlying was #2 in the FlightGlobal Webbies in 2009 and I won the Global Brand Leadership Award that year as well.

Then came the tougher part — how to turn this into a business? There were multiple ways we could have gone — it wasn’t uncommon for blogs in 2008 to be selling t-shirts and stickers to make money. I also enjoyed writing, and at one point seriously considered becoming a professional aviation journalist — at the time inspired by Mary Kirby (who was with FlightGlobal), Jon Ostrower (the original FlightBlogger) and Brett Snyder (of the CrankyFlyer fame). Though, I really wanted to get my hands dirty, and work with real airlines, rather than just talk about them. And that’s what pushed me towards setting up a consulting practice.

The start was not easy — building credibility in an industry I had no background in, required a lot of effort, a bit of luck and a large number of well wishers. I started attending aviation conferences to be a sponge and to learn from those in the industry. Soon, I was invited to moderate panels as an industry observer, and within months, I had delivered my first presentation at a conference in Abu Dhabi, had appeared on CNBC and quoted in the press.

I kept doing more conferences, and it wasn’t long before SimpliFlying bagged its first consulting client — which was St. Maarten’s Winair. Their CEO, Edwin Hodge, was impressed by my presentation at a conference in Miami and invited me to set up Winair’s social media strategy back in July 2009. Being a total aviation geek, I was just delighted to be going to St. Maarten. It was to be the first of many trips. We did good work, and Intercontinental Hotels Group became our second client. It’s the only hotel chain we’ve worked with, and the work with them in 2010 gave us the impetus to set up a proper consulting arm.

The twists and turns

If you compare airline marketing and communications back in 2009 and now, there has been a drastic transformation. Back when we started crafting a marketing vision for airlines, powered by social media and digital avenues, there were only a handful airlines like Southwest, jetBlue and Alaska engaging with customers online. Today, there are over 250 airlines on social media, making the industry one of the most active on the channel. 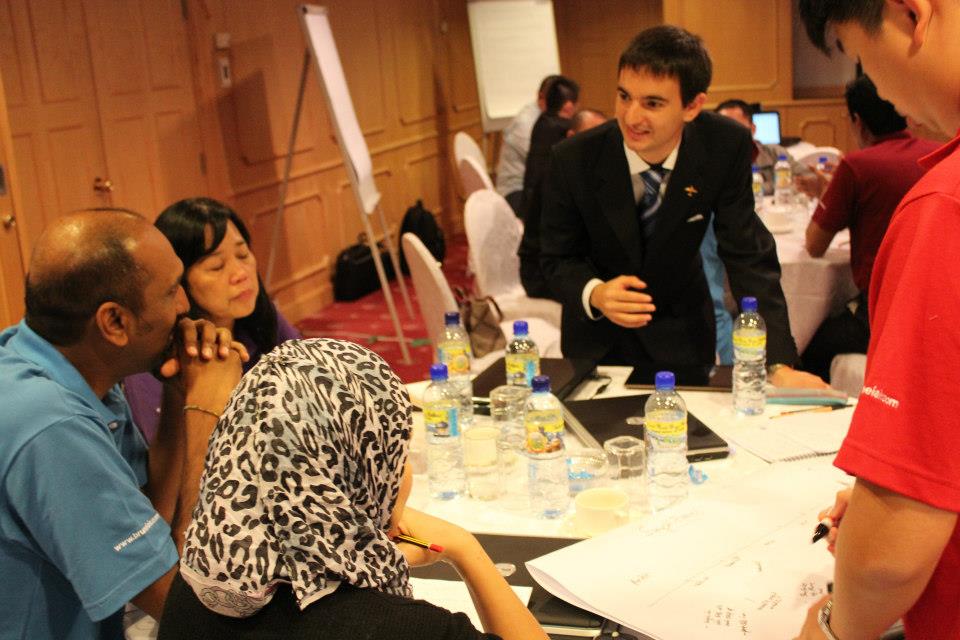 The team at work

Pushing for a highly conservative industry to embrace change has been no walk in the park. There were several pivotal moves made through the course of our business, risks we had to take to effect change in the industry.

We were advised not to start a training practice, as those who received training would never come back for consulting. Interestingly, some of our largest clients like LATAM Airlines started by attending our MasterClass. We were told to be cautious of smaller airlines, because they may not pay. Yes, we had to pursue some of them, but some of our most innovative work has been with smaller airlines like Estonian Air and airBaltic. We were told never to charge for speaking at conferences, but now, we are frequently sought around the world to share our insights at the most prestigious aviation events.

Today, we have worked with over 50 airlines and airports, spoken at over 60 events, developed models that continue to push the airline marketing frontier and regularly produce reports aimed at helping airlines understand and embrace the connected traveller.

It wouldn’t have been possible without the people…

We were fortunate to have been mentored from day one, by the likes of Donald Schenk, Patrick Murphy, Robin Speculand and many more. Beth Mastre taught me the basics of sales. Chris Brogan gave a vision of how social media could transform airlines. Industry leaders like Azran Osman-Rani, the former CEO of AirAsiaX, Mike Tod of Air New Zealand, Abdulrahman Al-Fahd of Saudia, Jeff Cacy and his team at Boeing continue to be an inspiration till date. Our clients and well-wishers have believed in us, and backed us for a long long time. Since the beginning, Nicola Lange of Lufthansa and Tero Taskila, the former CEO of Estonian Air have been great motivators too.

We have been blessed with awesome partners too. We have now published over 500 airline marketing case studies in our monthly benchmarking reports, in partnership with Raymond Kollau of Airlinetrends.com  Over at IATA, Marc Heinicke and Hicham Seifiddine have been great supporters. Max Kingsley-Jones and the team at FlightGlobal have welcomed our opinion pieces with open arms. Finally, Gina Baillie, Emily Assender and the team at Eyefortravel have been wholeheartedly supporting our Awards for four continuous years now!

Since 2009, we have fostered a lot of friendships in the industry, across the world, who have been great supporters. From David Parker Brown of AirlineReporter in Seattle, to Devesh Agarwal in Bangalore and Grant McHerron in Melbourne. Pawan Borle from flyDubai and Sumit Roy have been ardent supporters of the blog and the business. The industry folks have been welcoming of new ideas, and at the same time encouraged us to continue to push the boundaries. Last but not least, a heartfelt thank you to my wonderful colleagues at SimpliFlying, past and present. We wouldn’t have been half of what we are today without the super talented, hardworking and dedicated team we have had at SimpliFlying. We have created our own unique culture, meeting a few times a year during our SimpliRetreats and during client projects. We have our own SimpliWaterCooler — which is Skype and Whatsapp, and other traditions like #SimpliSurprises. Planning the next five!

To celebrate SimpliFlying going strong at six, below is a video looking back on our journey. Also, do leave us a birthday message on our ‘5th anniversary’ dedicated microsite here: bit.ly/simplifive

We are excited about continuing to think differently about airline marketing, for the next five years and beyond!