Today, the annual SimpliFlying Awards for Excellence in Social Media honoured the world’s best airlines for their achievements in digital and social media marketing. Currently in the seventh year, SimpliFlying Awards are the longest-running awards celebrating airline marketing success.

WestJet took home four awards – Best Overall Airline, Best Airline in North America and Best Airline in Driving Revenues and Highly Commended in Branding. American Airlines received the special honour of being inducted in the Hall of Fame for sustained excellence in social media. This was the second time at the SimpliFlying Awards an airline has been inducted into the Hall of Fame – KLM Royal Dutch Airlines was the first airline to receive this honour in 2015.

“SimpliFlying Awards encourage airlines to innovate and stay ahead of the competition. It’s heartening to see the likes of WestJet pushing the boundaries of airline marketing,” said Shashank Nigam, CEO, SimpliFlying.

Regarding the awards entries this year, Max Kingsley-Jones said, “There was a wealth of innovative and engaging campaigns among this year’s entries. We saw some clever ideas for social engagement and an interesting mix of submissions from some of the usual suspects along with a few of the more traditional players.”

Results Of SimpliFlying Awards 2017 For Excellence In Social Media

Congratulations to the SimpliFlying Awards 2017 winners! 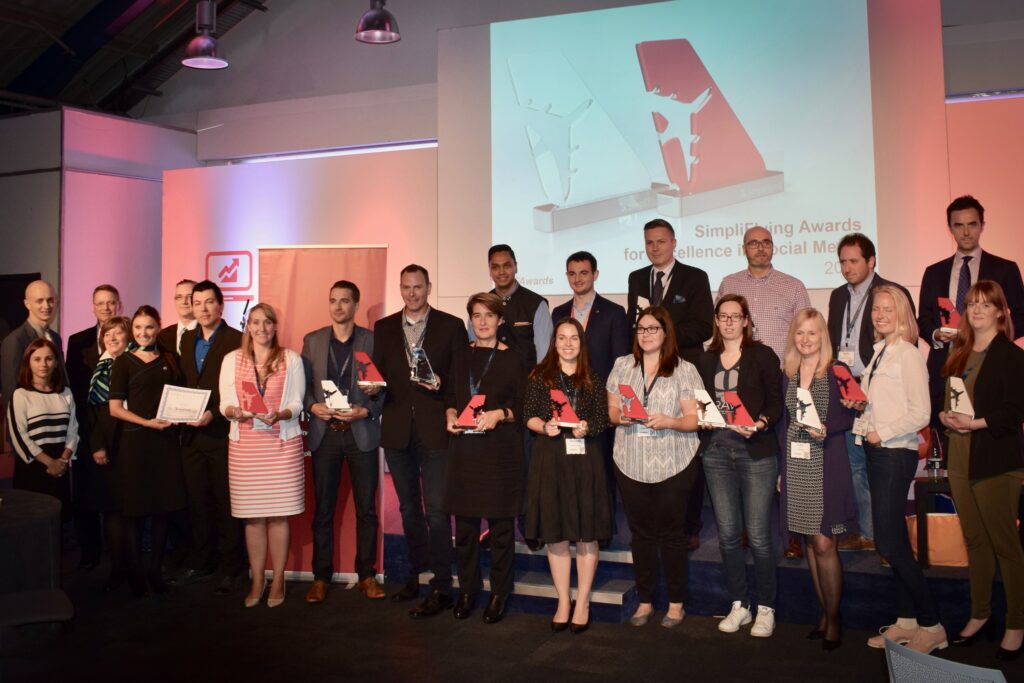 Last But Not Least…

Special thanks go out to Terrapinn, especially Daniel Boyle from Business Design Centre for supporting the SimpliFlying Awards 2017. Thanks go also to Gaudio Awards for such beautiful trophies.

SimpliFlying Awards for Excellence in Social Media, first established in 2010, are the longest-running awards dedicated to recognising the best social media practices in the aviation industry. Airlines around the world are shortlisted and assessed by an external panel of distinguished airline and travel marketing stalwarts. Committed to raising the industry standard, the SimpliFlying Awards invite the winning airlines to share their social media successes with the rest of the world. Past award winners include KLM, Southwest, Air New Zealand, Turkish Airlines, Cathay Pacific and more.